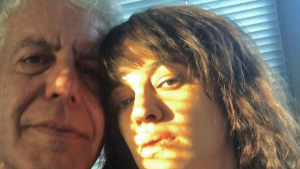 The latest in #MeToo news is yet another person claiming to be a champion for abuse victims who herself may have paid good money to silence an accuser.

Here’s what we know:

Asia Argento, one of the first women to come forward and accuse now-disgraced movie mogul Harvey Weinstein of outright rape, paid hundreds of thousands of dollars to a former co-star, Jimmy Bennett, who once played her son in a movie.

Bennett claims that the money was to keep silent about an incident that occurred when Bennett was 17 and Argento was 37 in which he had him meet her in a hotel room, gave him alcohol, and proceeded to rape him (the age of consent in California is 18, so whether or not it was consensual it is legally considered statutory rape at the very least, to be clear).

Argento has now responded, denying the allegations, and is giving a pretty disturbing reason for why she paid Bennett $380,000 last year.

She says her boyfriend, Anthony Bourdain, who took his own life in a hotel room in Italy earlier this year, told her to, and it has been reported elsewhere that it was he who provided the hush money.

Here is the statement she gave to a journalist who posted it to Twitter:

I just received this statement from @AsiaArgento in response to the NYT story published late Sunday evening. pic.twitter.com/jAOo7TAULX

Whether or not she is telling the truth about Bennett, many felt it was a pretty low blow to involve a man who is now unable to give us his side of the story.

Her story, however, is quickly falling apart, according to TMZ, who has photographic evidence and text messages that contradict her statement:

The then 37-year-old Argento and Bennett are on a bed shirtless, their heads on a pillow and their arms entangled. Sources tell TMZ the pic was taken after the 2 had intercourse. It’s a crime in California for an adult to have sex with a person under 18.

Argento released a statement Tuesday, saying, “I have never had any sexual relationship with Bennett.”

At the end of the day, this is just another reminder of how very little moral high ground Hollywood has from which to lecture the rest of us, and yet they do so anyway.

When sexual impropriety becomes chic and cool, it’s not long before the lines blur between what’s appropriate and what’s not, and the stories of genuine victims are more difficult to assess.

Let’s also not forget that the left loves to tell us how important it is to “believe all victims”, until it’s not.

They certainly can’t decide which it is.