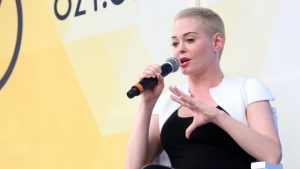 The left wing in this country has proven time and time again that they seem to own the corner market on hypocrisy, a statement that is not hyperbole as you’ll clearly see by how they have been behaving in regards to the woman who recently accused presumptive Democratic presidential nominee Joe Biden of sexual assault.

Apparently, the Washington Post published an article that slams accuser Tara Reade, the woman who claims Biden slipped his hand up her skirt and penetrated her with his fingers, doing their best to cast doubt on the woman’s story.

These are the same folks who ripped Brett Kavanaugh apart and shamed anyone who would dare question his accusers’s stories. Keep that in mind.

Well, actress and #MeToo figurehead Rose McGowan was not having any of it, ripping into WaPo for the article, calling it a “hit piece.”

On Sunday evening, The Washington Post published an article that examined Tara Reade, the woman who has accused former Vice President Joe Biden of sexually assaulting her by pushing his fingers under her skirt and inside her. In the article, the Post attempted to cast doubt on the legitimacy of Reade’s claim by noting, among other things, that last year Reade discussed the incident but only said Biden had touched her neck and shoulders; that she had become a vocal supporter of Biden’s chief rival for the Democratic nomination, Senator Bernie Sanders; that the Post “found no other allegations against him as serious as Reade’s”; that Reade had filed a police complaint last Thursday but had not named Biden; that Reade had claimed she had informed a therapist about the alleged assault but had not come forth with the therapist’s notes when the Post asked for them, and that although Reade said that in 1993 she filed a complaint with a congressional human resources or personnel office, she could not currently remember the exact name of the office and “the Post could find no record of the complaint, and Reade said she never received a copy.”

The Post’s seeming attempt to invalidate the legitimacy of Reade’s complaint infuriated actress Rose McGowan, a leading figure in the #MeToo movement who had been one of the chief accusers of Hollywood mogul Harvey Weinstein. McGowan tweeted a fiery post targeting the post, writing, “This is not journalism, this is an agenda. This is a hit piece. You’ve sunk to a new low in slanted journalism and victim shaming @Washington Post.”

This is not journalism, this is an agenda. This is a hit piece. You’ve sunk to a new low in slanted journalism and victim shaming ⁦@washingtonpost⁩ https://t.co/b32kjsyHoA

McGowan’s claim that his whole piece is designed to discredit Reade gains some traction when you look in the middle of the article where WaPo places a paragraph specifically targeting President Trump. The piece swings from being about Reade to suddenly being about Trump and the infamous video featuring the president saying to grab women between the legs in what he later referred to as “locker room banter.”

Guess the level of hypocrisy we’re seeing shouldn’t be all that surprising, yet here we are, shocked again.