The Mess YETI Coolers Has Made for Themselves 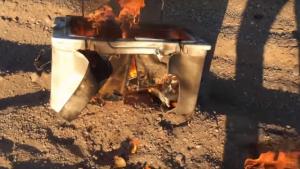 YETI coolers have enjoyed massive success as a popular outdoors brand, so they probably should have thought it through a little bit before suddenly cutting ties with the NRA in the middle of gun-grabber-led boycotts of brands and businesses associated with the NRA and gun manufacturers (oh, and Laura Ingraham, who says mean things) while offering no explanation.

The NRA announced on Sunday that without warning, the cooler company decided to end a discount offered to the NRA Foundation, the charitable arm of the NRA.

The Daily Wire shared the statement made by the NRA:

Suddenly, without prior notice, YETI has declined to do business with The NRA Foundation saying they no longer wish to be an NRA vendor, and refused to say why. They will only say they will no longer sell products to The NRA Foundation. That certainly isn’t sportsmanlike. In fact, YETI should be ashamed. They have declined to continue helping America’s young people enjoy outdoor recreational activities. These activities enable them to appreciate America and enjoy our natural resources with wholesome and healthy outdoor recreational and educational programs.

This didn’t go well for YETI, who found out the hard way there is a significant cross-section of outdoor enthusiasts who enjoy their products and patriotic, Second Amendment supporters who wouldn’t take too well to hearing this news not from YETI, but from the NRA.

Disgruntled former customers took to social media to express their objection to YETI’s move by blowing up their coolers (these are gun owners, after all) in the #YETICoolerChallenge.

Unfortunately for YETI, they apparently need to hire some new PR people, because they’re claiming now they never meant to make a political statement but rather wanted to end “a group of outdated discount programs.”

“When we notified the NRA Foundation and the other organizations of this change, YETI explained that we were offering them an alternative customizable program broadly available to consumers and organizations, including the NRA foundation,” the statement read.

“From our website to our film footage and our social media posts to our ambassadors, YETI has always prominently featured hunters pursuing their passions,” the statement added. “Moreover, YETI is unwavering in our belief in and commitment to the Constitution of the United States and the Second Amendment.”

It could have been a simple misunderstanding, but, unfortunately for YETI, their competitors took full advantage of the debacle to reassure their customers they fully support the Constitution!