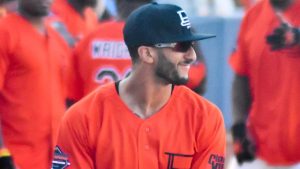 Republican members of the House decided to strike back at failed NFL quarterback-turned-political activist by trolling him after the US Women’s soccer team achieved victory over England in the semifinals.

Kaepernick, who has caused a great deal of controversy over the last several years, absolutely deserves all of the trolling and mockery he gets over his anti-American baloney, so let’s applaud these folks for their effort.

More from The Daily Wire:

The National Republican Congressional Committee (NRCC) account posted a GIF of the famed anthem-kneeler tossing a weak interception returned for a touchdown, adding the caption: “Good luck to [U.S. Women’s National Team]! Win this one for one of America’s first strong, independent women, Betsy Ross. We have no doubt you’ll be more competitive on the field than [Colin Kaepernick]. #USA #USAvENG.”

Good luck to @USWNT! Win this one for one of America’s first strong, independent women, Betsy Ross. We have no doubt you’ll be more competitive on the field than @Kaepernick7. #USA #USAvENG pic.twitter.com/RjMuXsTboI

The Betsy Ross nod from the Republican account was a reference to Kaepernick’s latest controversy: reportedly killing Nike’s “Betsy Ross Flag” edition shoe after he complained that it was “offensive.” The former 49er who famously knelt during the national anthem before football games signed a multi-million dollar sponsorship deal with the athletic gear giant last year.

According to The Wall Street Journal, the Nike sneakers protested by Kaepernick included a U.S. flag with 13 white stars in a circle on the heel of the sneaker, “a design created during the American Revolution and commonly referred to as the Betsy Ross flag.”

Kaepernick lives in a nation with ample freedom and a delightful free market system that allowed him to make millions of dollars tossing around a football. It didn’t matter what color his skin was. His “talent” is what opened up that door of opportunity.

Yet he seems rather ungrateful about the whole thing, doesn’t he?

The flag is the symbol of our nation and all the principles of freedom it stands for. Men and women have shed their blood and given their lives to protect those principles and ensure our way of life continues for future generations.

Kaepernick needs to show those folks some respect and stop this crusader nonsense he’s on.