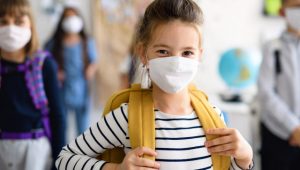 Child with face mask going back to school after covid-19 quarantine and lockdown.

A new report has revealed that the president of the Scottsdale, Arizona school board had a Google Drive full of private information, which included Social Security numbers, of parents who had been expressing their opposition to school mask mandates.

The drive, which the folks over at the Washington Examiner reviewed, contains tons of financial records from several of the parents that are involved in the group, which includes mortgage statements, bankruptcy filings, and even divorce filings.

“Included on those forms are portions of Social Security numbers, addresses, and phone numbers of parents who had expressed opposition to school mask mandates and critical race theory,” the report says.

The drive is available to anyone who has the link and otherwise mostly contains screenshots of the social media activity of parents involved with a local concerned parent Facebook group. Subfolders include labels such as “ANTI MASK LUNATICS” and “SUSD WACKOS.” The drive was last updated Sunday morning.

Besides the screenshots and financial documents, the drive includes numerous photos of the parents and their underage children.

The drive’s existence was discovered by a parent who received an email from School Board President Jann-Michael Greenburg that contained a screenshot of the URL, the Daily Caller reported .

“Amy Carney, one of the parents featured prominently in the drive’s contents, called on Jann-Michael Greenburg to resign. Carney is a 2022 candidate for the Scottsdale school board,” the report stated.

“We cannot allow anyone in a leadership position to secretly compile personal documents and information on moms and dads who have dared speak out publicly or on social media about their grievances with the district,” Carney stated.

“The elder Greenburg shares a home and a computer with his son, making it unclear who actually uploaded the documents onto the drive, the Independent reported. The files were all uploaded by an anonymous user with the name ‘Sach mat,’which translates from Czech to ‘checkmate.'”

The left is desperate to get folks to take the jab, so much so that they’ll even try bribery like they have with things such as students in the school. It’s disturbing.