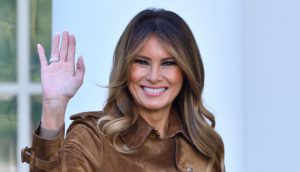 Almost a week after the horrible riots in the Capitol building, First Lady Melania Trump broke her silence and stated that she was “disappointed and disheartened” by the actions of the group of so-called Trump supporters who launched the assault last Wednesday.

“I am disappointed and disheartened with what happened last week,” Mrs. Trump said in her statement, going on to add, “Our Nation must heal in a civil manner. Make no mistake about it, I absolutely condemn the violence that has occurred on our Nation’s Capitol. Violence is never acceptable.”

Five individuals, including a U.S. Capitol Police officer, died during the incident.

“I pray for their families comfort and strength during this difficult time,” Melania said.

The first lady has largely stayed quiet on Trump’s unfounded claims about election fraud, but has echoed his statements on ensuring that every legal vote be counted, and has not publicly acknowledged Biden’s victory.

But in her statement, she said it “has been the honor of my lifetime to serve as your first lady.”

“I want to thank the millions of Americans who supported my husband and me over the past 4 years and shown the incredible impact of the American spirit,” she said. “I am grateful to you all for letting me serve you on platforms which are dear to me.”

Melania Trump also criticized the “salacious gossip, unwarranted personal attacks, and false misleading accusations on me – from people who are looking to be relevant and have an agenda,” seemingly referring to a CNN report that cited a source saying she had been overseeing a photoshoot during the riots.

“This time is solely about healing our country and its citizens,” the first lady said. “It should not be used for personal gain.”

People on the left will do anything to attack and destroy the Trump family, whether it is true, false, or somewhere in between. It’s sickening and sad to see this level of dedication to destruction rather than in improving the state of our society and culture.

So much for progressives making any real “progress,” right?