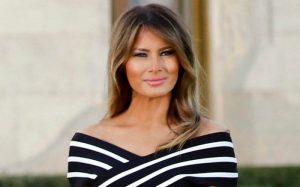 The left is obsessed with an image of Melania Trump, the sophisticated ex-model married to the most hated President leftists have ever known, as a virtual prisoner of Emperor Trump.

They’ve tried to claim she lives separate from the President, joked that she’s building escape tunnels from the White House, and relentlessly mocked the thick accent with which she speaks English, which just so happens to be one of six languages that Melania speaks.

I mean, how else could you explain such a poised, elegant, and gorgeous woman standing so loyally by such a brutish man other than to paint her as an innocent victim rather than a committed wife, right?

The left has gotten so far removed from what it looks like for a woman to be classy and feminine, it’s easier to explain her away as some kind of slave than praise her for what an excellent FLOTUS she’s managed to be.

So when rumors spread that the First Lady isn’t “allowed” to watch CNN, she and her spox must have had a good chuckle, before they totally destroyed those perpetuating the idiotic rumors.

“Seems kind of silly to worry about what channel she watches on TV (any channel she wants btw) or if she heard some recording on the news,” [Melania Trump Spokeswoman stephanie] Grisham wrote in an email.

She added that reporters should be focused on the First Lady’s task at hand: caring for children with neonatal abstinence syndrome. On Tuesday, Melania visited a hospital in Nashville, Tennessee, that is caring for children born addicted to opioid drugs, as part of her “Be Best” campaign, which seeks to help children and young adults affected by the American opioid crisis.

“Did you know that every 15 minutes a baby is born with NAS? Maybe you’d like to talk about the 160,000 kids who skip school every day for fear of being bullied, or that 280,000 students are physically attacked in schools every month,” Grisham added.

The New York Times reported on an administration “leak” Tuesday night, claiming that President Donald Trump “raged” after “spotting CNN on a TV aboard Air Force One,” and screamed at staff for “violating a rule that the White House entourage should begin each trip tuned to Fox.”

Here the First Lady is, using attention to bring awareness to children affected by our nation’s grievous opioid epidemic, something so awful and pervasive that all Americans should be unified in combating it.

There used to be a time that, Democrat or Republican, everyone could appreciate non-partisan political issues like this in which First Ladies have historically focused their time to work on.

But who has time to cover this when there’s an image of a victimized and helpless First Lady to be pushed?