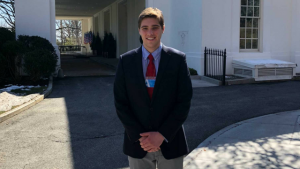 While the media tend to focus their sights on the handful of teenagers who survived the Parkland shooting who just so happen to parrot their own narrative about gun violence and gun control, these teenagers hardly represent all young people in our country, many of whom are just as concerned about gun violence–their methods just aren’t as appealing to the mainstream media.

One of the reasons the Parkland teenagers have been revered by the media as moral arbiters is that they witnessed the tragedy of the Parkland shooting first hand, thus, their opinions are more superior to the average NRA member who wants to be able to defend their home with an AR-15.

But if experiencing tragedy makes one’s opinions more valid, why isn’t Kyle Kashuv, the pro-2A survivor of the Parkland shooting, given anywhere near as much air time as David Hogg?

And why have we never heard of 17-year-old J.T. Lewis, who lost his brother in the horrific Sandy Hook shooting and now advocates for armed guards in schools?

The Daily Wire’s Frank Camp recently interviewed young Lewis, who has an impressive charitable record and, in the wake of the anti-gun hysteria following the Parkland shooting, has shifted his sights to school safety.

Lewis, as he told Camp, channeled his grief towards a beautiful cause when he found it too difficult to return to school after his brother, Jesse, was killed.

“After the shooting, I hadn’t been going back to school. It was just too hard. I was sitting around the house, depressed,” he explains. “Through a family connection, I was able to Skype with these kids from Rwanda who had been through the 1994 genocide. They had their whole families killed — some of them were buried alive — and they basically said, “You’ll be happy again. You’ll do better.” That was inspiring for me — someone who had been through it, and much worse in many cases.”

He would go on to found Newtown Helps Rwanda, and was able to successfully raise funds to send Rwandan children to college, but he is not thrilled with some of the other charitable groups that were founded following the shooting, noting scornfully that organizations like Sandy Hook Promise that “raise money off the backs of dead children and use that donation money to push an anti-gun message, which not all of us support.”

He is critical of the agenda that had followed every major shooting since Columbine, nothing that they’ve never done anything to actually quell gun violence.

“They want to repeal the Second Amendment; they make claims not really knowing what types of guns are what. I hear them say they want to get rid of all semi-automatic weapons, which is basically all guns,” he says.

As for the kids in Parkland, he doesn’t think they’ll ever get what they want with the methods they’re using: “After Parkland, when I saw those kids get up and start making anti-gun remarks. I felt bad for them because it wasn’t going to work, and they were going to be let down. And there’s a way that we can make our schools safe for right now.”

He wants us to know what the media is not telling us about real mesaures that can be taken to prevent school shootings, and it’s definitely not repealing the Second Amendment:

“You don’t hear it from the media, but there are a lot of people who support the Second Amendment. I would say the silent majority. So I think that’s an important message to keep getting out there. Also, there are ways that we can make our schools infinitely safer without giving up our constitutional rights.”