Meet Jack Wilson, The Man Who Took Down The Texas Church Shooter 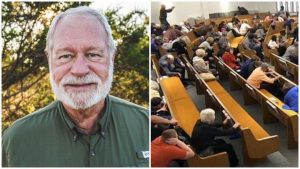 The nation reeled yesterday after it hit headlines that yet another church in Texas had become the victims of a shooting attack.

Thanks to church security volunteers like Jack Wilson, however, the body count was drastically reduced—and finished with the attacker himself.

Wilson, a parishioner at the West Freeway Church of Christ in White Settlement, Texas, former reserve deputy sheriff, and a veteran firearms training instructor, is largely credited with the incredible kill shot that took the yet-unidentified shooter down just six seconds after he first opened fire.

“The suspect is deceased, and the threat has stopped thanks to the heroic action of those two parishioners at the church,” White Settlement Police Chief J.P. Bevering said at a news conference. The second parishioner who opened fire on the gunman has not been named.

Shocking footage of the shooting was captured on the church’s live stream on YouTube. Watch the video, with victims’ faces blurred for privacy, below:

The gunman stands up to speak to another person in the church before pulling a shotgun from his jacket and shooting two people. As the sanctuary fills with screams, Wilson takes aim and nails the man from across the room. Several other armed members of the church’s security team approach the gunman afterward.

Wilson revealed on his Facebook page for his County Commissioner campaign that he was, in fact, the man shown in the video taking down the shooter.

“I just want to thank all who have sent their prayers and comments on the events of today. The events at West Freeway Church of Christ put me in a position that I would hope no one would have to be in, but evil exist [sic] and I had to take out an active shooter in church,” he wrote.

“I’m thankful to GOD that I have been blessed with the ability and desire to serve him in the role of head of security at the church,” Wilson continued. “I am very sad in the loss of two dear friends and brothers in CHRIST, but evil does exist in this world and I and other members are not going to allow evil to succeed. Please pray for all the members and their families in this time. Thank you for your prayers and understanding.”

And, for those wondering what he used to take that legendary shot, he indicated in a comment, saying, “SIG P229-357 SIG.”

“Two of the parishioners who are volunteers on the security force drew their weapons and took out the killer immediately, saving untold number of lives,” said Texas Lt. Gov. Dan Patrick in a news conference.

“The heroism today is unparalleled,” he continued. “This team responded quickly, and within six seconds the shooting was over.”

The way this church security team responded should be “studied and watched by law enforcement, private citizens, and churches or anyone else who trains in their own security to see how lives can be saved,” Patrick added.

Wilson, 71, is also the owner of On Target Firearms Training Academy, Inc., established in 1995.

On his campaign website, Wilson, an ardent Trump supporter, said earlier this month, “There once was a time the President was honored, police were respected, newborns were treasured, & vets were revered. Let’s bring that back…”