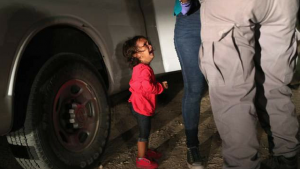 This week has seen the Democrats show their true colors when it comes to the child detainment policies at the border.

They never cared about that, they just wanted to put an end to Trump’s zero-tolerance policy for illegal border-crossers.

I know, it’s a shocker. I’ll give you a moment to recover.

It also just so happens that one of the small children whose image they’ve been gleefully exploiting to try to gain public support for their entirely selfish agenda also wasn’t even separated from her mother.

Here are some examples of how this poor little girl’s image spread like wildfire to shamelessly bolster the Democrat opposition to Trump:

This photo is absolutely heartbreaking. Republicans control the House and Senate. They have the power to end Trump’s cruel policy of separating children from their families but continue to remain silent. https://t.co/CfZlxrOYEN

This is Trump’s America. What’s going to happen to this 2-year-old Honduran girl? The new policy is to separate her from her mother. Shame!!! pic.twitter.com/vy6HtRupQE

The government is illegally separating children from parents seeking asylum.

Stop calling this Trump’s America. He lives in our America. It's on us – The People – to stand up against these atrocities.

Imagine this terrified girl being separated from her family. Just imagine. And if you’re fine with it, and if you can justify it in your mind and heart with the Bible, you might want to restart with the basics and sign up for a summer Bible camp. https://t.co/iNi3vKpHxp

The image is heartbreaking and the emotional response, while devoid of actual facts, of course, is still understandable.

Clearly, one of the reasons this particular narrative has been so effective for the Democrats and their pals in the media is that no decent person actually glories in a small child being separated from their mother.

Here’s the thing: it was the caption that made this photo particularly heart-wrenching, as we were told that the girl was ripped from her mother’s arms, right?

Turns out, just like the “baby in a cage” that was debunked earlier this week, this photograph was also “miscaptioned.”

The girl never was separated from her mother.

Denis Javier Varela Hernandez, the father of 2-year-old Yanela, who is pictured in the ubiquitous photograph, recently gave an interview with Daily Mail in which he revealed what really happened:

Denis Javier Varela Hernandez, 32, said that he had not heard from his wife Sandra, 32, who was with his two-year-old daughter Yanela Denise, for nearly three weeks until he saw the image of them being apprehended in Texas.

In an exclusive interview with DailyMail.com, Hernandez, who lives in Puerto Cortes, Honduras, says that he was told yesterday that his wife and child are being detained at a family residential center in Texas but are together and are doing ‘fine.’

‘You can imagine how I felt when I saw that photo of my daughter. It broke my heart. It’s difficult as a father to see that, but I know now that they are not in danger. They are safer now than when they were making that journey to the border,’ he said.

Denis said his wife and daughter were never separated by border control agents and remain together.

He went on to explain that–image this–he thinks it was irresponsible of his wife to carry a 2-year-old across the border, especially considering their crossing was facilitated by coyotes, paid human smugglers.

Yeah, I would tend to agree!