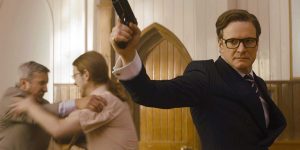 You’ve got to love the spring-loaded pearl-clutching leftists do when their delicate sensibilities have been offended.

Literally any of the sickening things that have become commonplace in our culture pass by the eyes of the loving, tolerant liberals without issue, but good Lord almighty if some nimrod makes a meme video that places President Trump and members of the media in a grisly massacre scene of a movie, they lose their damn minds.

Of course, I’m referring to the graphic parody video showing Trump shooting members of the media, Democrats, and activist groups, which played at the American Priority Conference over the weekend as part of an “art installation” by self-described “memesmith”, Carpe Donktum.

The President disavowed the meme, as the Daily Wire reports, in spite of the fact that, as far as memes go, it’s positively ancient and apparently hasn’t inspired any violence against the media so far:

The video, which has been on YouTube for sixteen months without much notice, attracted the attention of the New York Times, which posted a blockbuster breaking news report on the film Sunday night. Members of the media were quick to condemn the video, suggesting that it was an open call for violence against journalists and activists, and accusing the White House of promoting and encouraging violence.

“Sadly, this is not the first time that supporters of the President have promoted violence against the media in a video they apparently find entertaining — but it is by far and away the worst. The images depicted are vile and horrific,” CNN said in a statement released late Sunday. “The President and his family, the White House, and the Trump campaign need to denounce it immediately in the strongest possible terms. Anything less equates to a tacit endorsement of violence and should not be tolerated by anyone.”

Funny, I don’t recall them drumming up this same shock and terror when the film the meme is based on, Kingsman: The Secret Service, was first released in 2015.

Why not? Well, aside from the obvious point that the meme uses the likenesses of real people (how terrifying), the original scene in the film took place in a church full of those insufferable hateful intolerant mean nasty awful Christians.

In the scene, which even this Quentin Tarantino fan had a hard time watching, Colin Firth’s character utterly massacres up to 40 churchgoers who end up as collateral damage when Samuel L. Jackson’s villain character remotely controls their phones to emit a frequency (or something) that causes them to become violent. Ridiculously contrived plot details aside, the scene, set to the guitar solo from Free Bird, glorifies a church massacre.

And, of course, at the time, the media didn’t give a damn about it.

The Washington Post, which labeled the Trump meme “vile and horrific,” used very different words to describe the scene on which it’s based. In a 2015 review of the film, Washington Post writer Michael O’Sullivan was positively rapturous, calling the cartoonish carnage “balletic” and a “masterclass.” A more recent article in The Ringer says the church massacre is the most “well regarded” moment in the film. The site concurs that the scene is indeed a “masterclass.” We should also note that the movie received generally positive reviews at the time of its release, earning a very respectable 74 percent on Rotten Tomatoes.

The situation for the original scene is not improved much by the fact that the victims are all Westboro racists. First of all, that’s how Hollywood sees all Christians. For Hollywood, there really is no difference between a Westboro church and any other church. Especially in the south. Second, making them bigots was obviously a cheap narrative trick designed to give the viewer permission to take delight in their mass execution. In reality, we would hopefully all agree that it is not okay to randomly mow down racists at church. Or maybe we can’t agree about that. Either way, there is no reason to panic over the meme if you didn’t panic when the movie came out four years ago.

Even Mark Millar, the author who wrote the comic books that inspired the film series, was a little surprised by the original church scene before it was trimmed down, Business Insider reports:

“It’s amazing what the cutaways do [for the scene],” he said. “Those three or four seconds give you a moment to take a breath. Seeing it relentlessly for seven minutes you’re like holy s—, I can’t believe what I’m looking at. It’s obscene! Matthew asked me if I thought it was too much and I was like, ‘I’m feeling it’s too much, and I’m the guy whose been playing video games since 11, and I can’t handle this.’”

I must add, though I can’t prove any connection and don’t believe that films inspire real-world violence quite so much as people seem to think, that the film predates the 2017 Sutherland Springs church massacre in which a young man walked into a Sunday service and killed 27 people (including an unborn child), wounding 20 more. So, again, why is the scene in the movie celebrated, but the meme is supposed to incite violence?

The plot gets a little thicker when you realize, as Business Insider points out, that the Kingsman film writers changed the original scene from the comic books. In the comic, Secret Service #2, “the evil signal is unleashed at a beautiful beach where a group of brides and grooms are getting married. When the signal is turned on they pummel each other to death.”

So, why a church? Especially a caricatured Westboro Baptist hate group style church? As Matt Walsh pointed out, this is how the media sees all Christians. The church scene in the Kingsman film was the mainstream leftist society’s meme of conservative Christians. They’ll never admit it in a million years, but it’s plain to see.