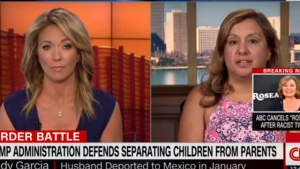 The media have been breathless recently over what they perceive as Trump policies-era that “separate families” who find themselves in various stages of, you know, being in the country illegally.

The media aren’t terribly bothered by the fact that a) these people are, by definition, breaking the law or that b) spoiler! The same thing happened under the Obama administration. Their focus, of course, is to undermine the Trump administration as much as humanly possible, facts and common sense not necessary.

So they couldn’t have been too thrilled when the wife of a recently deported Mexican immigrant calmly told a CNN anchor that she wasn’t mad at Trump and he was just “doing his job.”

Cindy Garcia’s husband, Jorge, was deported in January after being brought to the U.S.

To be fair, the anchor, Brook Baldwin, told Mrs. Garcia that she had read she wasn’t angry at the government for deporting her husband. But the line she was towing, particularly in her dramatic emphasis on the adjective-free phrase “immigrant” to refer to Mr. Garcia, was thinly veiled.

“I am not upset at our government due to the fact that I am a U.S. citizen and our laws come first. Our laws are just broken and need to be fixed,” Mrs. Garcia said in response to Baldwin’s question.

“But I can’t be mad at Trump for doing his job,” [CNN producer: “Cut her mic, cut her mic!”] she continued.

“Because that is his job, to protect U.S. citizens from criminals,” [Producer: “Abort! Abort! Shift to the Roseanne tweets!”] “But my husband is not a criminal, and those are the laws that need to be fixed,” she concluded. [CNN Producer: “…OK, Democratic talking point, we can work with this…”]

“You can argue being here illegally meant he was breaking the law. Ok? Ok,” writes Brodigan at Louder With Crowder.

“But the point Garcia was making was drawing a line between people who were brought here as kids, and say the murderous gang members of MS-13. Who the Democrats have gone all in protecting from being insulted. It’s a fair distinction to make. Children brought here by their illegal parents and MS-13 gang members who behead innocent people,” he explains.

“Yeah, not really the same,” he adds.

This is indeed the trend we see in the media narrative, particularly with Baldwin’s use of the phrase “immigrant” without a qualifiyer such as “illegal” or “undocumented.” The media have succesfully convinced millions of voters that there is no distinction between an immigrant who is here legally and an immigrant who is here illegally. In reality, there are incredibly important distinctions between these two groups.

Yes, is not only valid to draw a distinction then within illegal immigrants between an MS-13 member and a Honduran family fleeing insurgent violence, it is incredibly important to do so. That being said, when you enter a country illegally, that is technically breaking the law, and it helps no one to just let everyone in with no questions asked.

This is the power the media has over the narratives, and a testament to the power language has to influence minds.