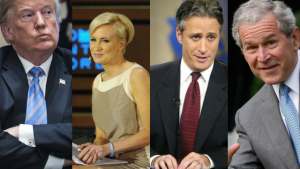 He’s an equal-opportunity name-caller, no doubt about it. Despite the media’s never-ending quest to extract something racist over literally everything he ever utters (and they never run out of material, he utters a lot), it’s hard to conclude that Trump reserves his worst insults for people of color.

Remember, Trump ran against Dr. Ben Carson, who is black, way back in 2016, and he never once called Carson, who is a gifted, Harvard-educated, world-renowned pediatric neurosurgeon “stupid.” He called him “low-energy”, “weak”, and even “pathological”, but never once did he call him “stupid.”

This hasn’t stopped the claims that he only calls black people “stupid!”

On NBC’s “Meet the Press” Monday, Chuck Todd made this conspiratorial claim while interviewing Sen. Roy Blunt, saying “It’s always with an African-American that he questions their intelligence”.

No, of course not. After all, as Freedom’s Lighthouse recalls, he also called “Morning Joe” co-host, Mika Brzezinski, who is about as white as it gets (as if the last name “Brzezinski” wasn’t obvious enough to you), “Low I.Q. Crazy Mika” last year:

The New York Times also notes that “Mr. Trump has often heralded his own I.Q. and has questioned the intelligence of others, including Jon Stewart and George W. Bush.” (This was right before diving right into the “Trump’s a racist” narrative, of course, but what can you do…it’s the New York Times.)

All this seems to demonstrate is that Trump likes calling people stupid. Perhaps the real story is that he needs a wider array of insults, but it’s certainly not that he’s a racist.