Meanwhile…Nikki Haley Is Still Crushing It at the Anti-Israel, Pro-Hamas United Nations 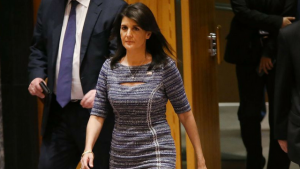 As the United Nations continues to try to bash Israel for defending its own sovereign borders from terrorist attacks committed by a group who openly explains they are trying to destroy Israel and kill Jews, Nikki Haley has once again had to rip the international governance organization for their backward view of the Israel-Palestine conflict.

On Wednesday, once again, U.N. Ambassador Nikki Haley fearlessly spoke the truth about the Israel-Palestinian conflict, squarely putting the blame for the conditions in Gaza on the terrorist group that runs the area: Hamas.

Haley spoke before the U.N. General Assembly voted for a resolution introduced by Algeria, Turkey and the Palestinians that condemned Israel for “excessive, indiscriminate force by the Israeli forces” against the Palestinians.

Haley wanted to include an amendment in the resolution that would have condemned Hamas, the terrorist organization that has been carrying out attacks at the Israeli border with the openly stated goal of terrorism.

They enjoy the blind support of media outlets and progressive politicians in the West, however, who routinely paint the openly anti-Semitic would-be invaders of a sovereign nation as innocent protesters who are routinely mowed down by IDF for peaceful demonstrations at the border, which couldn’t be further from the truth.

Haley slammed the U.N.’s lack of concern about humanitarian crises in countries like Nicaragua, Iran, Burma, and Yemen, none of which have prompted the General Assembly to hold special meetings as they have with Gaza.

Why the focus on Gaza?

She has an answer: “What makes Gaza different for some is that attacking Israel is their favorite political sport. That’s why we’re here today.”

The resolution, she said, “is totally one-sided. It makes not one mention of Hamas, who routinely initiates violence in Gaza. Such one-sided resolutions at the UN do nothing to advance peace between Israel and the Palestinians. Everyone recognizes that. But advancing peace is not the goal of this resolution.”

It feeds a narrative to the desperate people of Gaza that their leaders are not responsible for their predicament. It stokes hatred. It sacrifices honesty, accuracy, compromise, and reconciliation in favor of the advancement of a narrow political agenda.

I wish everyone supporting this one-sided resolution would put as much energy into encouraging President Abbas to come to the negotiating table, as you do to falsely imply to your people back home that you’re doing something.

“srael withdrew completely from Gaza in 2005. Hamas has been the de facto government in Gaza since 2007. This strip of land along the Mediterranean coast has enormous potential. And yet, after 11 years of Hamas rule, Gaza has electricity for only a few hours a day. It has enormous unemployment and poverty. It is a haven for terrorist activity. At what point will the UN actually hold accountable those who are in charge of Gaza and running it into the ground?

It is Hamas and its allies that have fired over a hundred rockets into Israel in the past month, hoping to cause death to as many civilians and as much destruction as possible. It is Hamas that has used Palestinian civilians as human shields at the boundary fence, seeking to incite violence and overrun the border. It is Hamas that refuses to cooperate with the Palestinian Authority to unite in the pursuit of peace. It is Hamas that calls for the destruction of the state of Israel within any borders. And yet the resolution before us not only fails to blame Hamas for these actions, it fails to even mention Hamas. This is the dangerous, counter-productive decision the General Assembly is about to take.

The United States is offering an amendment that provides a small step in the direction of balance. Our amendment rightly condemns Hamas’s indiscriminate firing of rockets into Israeli civilian communities. It accurately condemns the diversion of aid and resources from civilian needs into military infrastructure, including terror tunnels used to attack Israeli citizens. It justly expresses our grave concerns about damage done to border crossings that are hindering the delivery of desperately needed food and fuel to the people of Gaza. This is a modest amendment that reflects the minimum truth of what is going on in Gaza. It is the least that any self-respecting international organization or nation can do for the cause of peace.

Yet another epic delivery from Nikki Haley on one of the most insane political lies in our global community today.