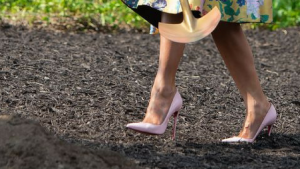 As a former fashion model, Melania Trump has absolutely nailed the always-classy look that most First Ladies aspire to since Jackie Kennedy set the standard for FLOTUS fashion.

She literally always looks fantastic, and pretty much the only thing the press has ever been able to criticize her on is fashion-related, like her confusing “I don’t really care, do u?” faux pas, and that one time she wore heels while walking to Air Force One on her way to visit the volunteers and survivors of Hurricane Harvey (she changed into practical sneakers on the plane).

For a recent tree-planting event at the White House she skipped practical, however, and stayed in a designer skirt and $4,000 Louboutins to literally dig a hole with a shovel in which to plant the tree and thus became my new hero.

Only Melania could successfully garden in designer clothing.

I had the honor to contribute to the beautiful & historic @WhiteHouse grounds today by planting a sapling from the Eisenhower Oak. Thank you to @WhiteHouseHstry for organizing the #PresidentialSites and to the previous first family descendants who joined us today. pic.twitter.com/uqzKxNbL9H

Western Journal explains that while Melania’s outfit got all the attention, the reason she was gardening in Louboutin’s was actually pretty cool:

The tree being planted was a sapling that came from the original Eisenhower oak in an East Wing garden created by Jacqueline Kennedy, Fox News reported.

“It’s a beautiful tree that we will plant today,” Melania Trump said during the ceremonial event.

The first lady was joined by the descendants of past presidents, including Mary Jean Eisenhower, a granddaughter of President Dwight David Eisenhower, and Richard Emory Gatchell, Jr., who is descended from President James Monroe. The presence of a Monroe descendant was significant, because the day marked 200 years since President Monroe moved back into the White House after it had been repaired form damage suffered in the War of 1812.

The first lady thanked the National Park Service for keeping the White House grounds in “beautiful shape and the whole of America in good shape.”

“I also want to thank the White House Historical Association for putting together the summit. … It’s the first day,” the first lady said. “So good luck with the summit. Thank you all for coming.”

These are the sorts of things going on behind the scenes as the press and Trump continue their never-ending feud.

This is a very neat way to honor our nation’s history and Melania has just (literally) planted a little bit of her own at the White House!