Meanwhile, Christians in Myanmar Are Being Attacked By Pro-Chinese Militants for Their Faith 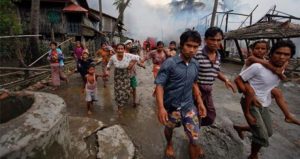 It’s so easy to get caught up in our political scandals or daily lives and forget that, no matter how hectic or laughable things get here in the US, we are still so blessed and privileged to be free.

Although we’re all a little concerned by the violence from the left over the last few years, it’s nothing compared to what religious minorities suffer when targeted by militant groups in other nations.

Christians in Myanmar are currently being targeted by pro-Chinese militants, who, taking a cue from the Chinese government who has ramped up persecution of Chinese Christians over the last month, have been burning down churches and kidnapping ministers.

Christians living in eastern Myanmar faced a deadly uptick in persecution earlier this month when the Pro-Chinese militant extremist group United Wa State Army (UWSA) attacked several churches along the border with China and kidnapped several ministers who claimed that the churches were built without permission from the organization.

According to AsiaNews, the UWSA released a statement of beliefs which told military personnel under their control to “find out what the [Christian] missionaries are doing and what are their (intentions.)” The statement also threatens public officials who support Christians.

A witness to the destruction told Morning Star News that at least a dozen churches have been destroyed or shut down by the UWSA.

A spokesperson for the UWSA told a Yangon-based newspaper, “We are trying to control the instability in the region caused by extremist, unregistered religious leaders from outside.”

Imagine that–the people burning down churches are calling those who once worshipped within “extremist.”

If you can attend church and worship in peace with your family, you are blessed. Christ told His followers that as He suffered, they would suffer too for His name.

As you get caught up in the busy day-to-day or feel like all of America has it out for you as a Christian or as a conservative, don’t forget that around the world, many of our brothers and sisters are facing much more than we are.

Let’s keep them in prayer and count our blessings–and remember why we fight to protect our sacred liberty here at home.