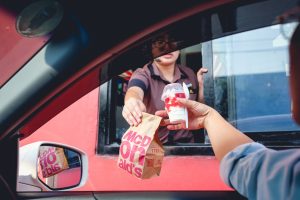 The “woke” virus is spreading, and the capeless heroes of fast food joints seem to take their self-appointed roles as societal gatekeepers and protectors of snowflakes very seriously.

The irony of this is unbearable as such folks continue the trend of refusing to serve men and women in uniform who, you know, actually serve the community in a crucial way.

To be fair, virtually every corporate response to such events has involved, at the least, a sincere apology to the slighted officers. For one worker in a Florida McDonald’s, the outcome was no different, and the offending employee learned that this is a fast and effective way to get your fool self fired.

According to WFTS-TV, two paramedics visited a McDonald’s in Madeira Beach on Wednesday night, where an employee told each of them separately that they would not be served because they were wearing badges.

What on earth is happening, y’all? It’s one thing for power-tripping restaurant staff to refuse to serve on-duty police officers, now a couple of paramedics can’t get a Big Mac because their very presence might be a trigger?! Do we even recognize our own country anymore? It’s getting harder every day, that’s for sure.

One of the paramedics, Anthony Quinn, said that the employee had initially told him, “we don’t accept officers in here.” When Quinn explained that he is a paramedic and not a law enforcement officer (as if that should even matter) the employee rephrased his “policy” to refuse service to “anyone with a badge.”

Quinn also said that when his partner entered a few minutes later, he was also told, “we don’t serve your kind here.”

The life-saving kind? Got it.

According to Newsweek, Quinn said in a now-deleted Facebook post that it was “[j]ust insane how people are.”

In a statement to WFTS, the Madeira Beach location’s franchisee confirmed that the incident had taken place and offered the following statement:

We are aware of the unfortunate incident that took place at one of our restaurants last night. We, like you, were upset and disappointed and took immediate action. The employee has been terminated. What occurred does not reflect the values of our brand, our franchise, or the love and admiration we have demonstrated consistently for our friends in law enforcement and first responders. We have reached out to offer our sincerest apology.

While the apology (and the action) are commendable, something tells me this won’t be the last we hear of first responders being denied service by a burger-flipper with megalomania.