Mayor Of Buffalo Now On Track To Defeating Challenge From Socialist 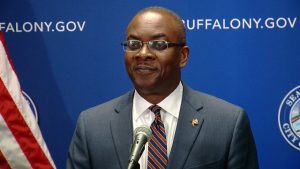 Buffalo Mayor Byron Brown seems to be on the cuff of defeating India Walton, an avowed socialist who nabbed the Democratic Party primary earlier in the year.

Walton had been trailing in write-in ballots, however the ballots still need to be hand counted in order to confirm their accuracy.

Brown declared victory in the race, and the state Republican Party celebrated what they called a defeat of socialism.

In June, Walton defeated Brown in the Democratic primary, and her path to the mayor’s office looked clear in a city that has not elected a Republican mayor since the 1960s. But Brown, who is a former chairman of the state’s Democratic Party, launched a write-in campaign asking voters to “Write Down Byron Brown.”

The race is an example of divisions playing out across the Democratic Party between centrists and progressives, as seen in recent weeks in Congress, where Democratic lawmakers have yet to come to an agreement on a social spending package making up key portions of President Joe Biden’s domestic agenda.

It’s been a strong showing for the Republican Party this year, which points toward the fact that the GOP is going to end up taking back the House of Representatives and wrestling power away from radical leftists who are trying to perpetuate the coronavirus on the rest of the country.

This victory should have liberals shaking in their boots.