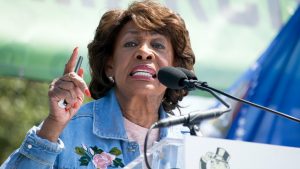 Rep. Maxine Waters has apparently lost her marbles. Not that she really ever had any. It seems this lady was born with a few screws loose and nobody has bothered to come along and help the poor gal tighten them up.

Waters is apparently now calling for former President Donald Trump to be charged with “premeditated murder” over the riot at the Capitol back on January 6.

Hey, while we’re at it, how about somebody have Waters committed?

“He absolutely should be charged with premeditated murder because of the lives that were lost for this invasion with his insurrection,” she said on MSNBC. “For the president of the United States to sit and watch the invasion and the insurrection and not say a word because he knew he had absolutely initiated it – and as some of them said, ‘He invited us to come. We’re here at the invitation of the president of the United States.’”

Five people, including a Capitol Police officer, died during the riot.

Waters said the rioters were “following the president” when they stormed the Capitol.

“What’s so interesting about all of this is they tried to make themselves the victim when indeed they are following the president of the United States of America who had advance planning about the invasion that took place in our Capitol. Even there’s information that some of the planning came out of individuals working in this campaign,” Waters said.

“When he rallied, he said go to the Capitol, fight hard. This is, take back your country. So if that’s not inciting the kind of violence that we witnessed, I don’t know what is,” she continued.

So the assumption here is just because some people showed up wearing Trump hats and shirts with signs, these folks are for sure supporters of the president and thus, their behavior is his responsibility.

However, Antifa was in the crowd. We know that for sure. How much of what happened was their responsibility? How much was on Trump supporters?

Regardless, at the end of the day, the president called for these individuals to protest peacefully and they decided, on their own, to not do that. It’s absurd to suggest the former president be charged with premeditated murder.