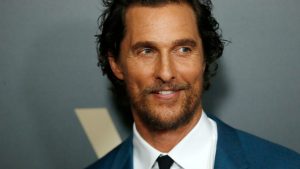 Popular actor Matthew McConaughey isn’t exactly an outspoken, gung-ho supporter of guns, as he openly supports some gun control measures and recently spoke at a “March for Our Lives” event in Austin, Texas.

Remember this is the guy that also isn’t gung-ho about the use of deodorant, but that’s another story.

The good news is that unlike the vast majority of the anti-gun folk pouring out of Hollywood, McConaughey is still afraid that this movement, primarily led by young people without a clue, will be co-opted by extremists who want to do away with the right to bear arms entirely.

McConaughey spoke at CinemaCon, a gathering for theater-owners, on Monday of this week where he stated that gun violence is “an epidemic in our country” that he desires to see curtailed without violating the Second Amendment.

“I’ve got a lot of friends who are gun owners. I’ve got a lot of friends who are NRA (National Rifle Association). I grew up hunting. We had responsible gun ownership, but I was taught the right way to respect that tool,” he said. “At the same time, their petition that they were speaking about is a very good one. And I also fear that their campaign — they have to watch that they don’t get hijacked. Meaning, a lot of the crowd was for no guns at all. That was not the march for life. March for Our Lives was for rightful, just, responsible gun ownership — but against assault rifles, against unlimited magazines and for following up on the regulations.”

The actor said he hopes to see some sort of middle-ground reached between the two sides of the issue, with compromises from both sides.

“The two sides (have) got to talk. Because we both agree that there’s an epidemic,” McConaughey said. “We both agree something has got to change. So I was for what they were marching for, and I wanted to speak to my hometown on the capital of my state Texas’ steps. And also talk to the many men and women who I grew up with, I know that had the guns, that owned the guns, and say, ‘hey, do we really, where can we reach across the aisle here? Find a compromise for the betterment of all of us?’”

While there’s plenty to disagree with here, the bottom line is that McConaughey, unlike others in the entertainment industry, is willing to calmly discuss the topic without screaming until the veins pop in his forehead and name call until the cows come home.

Believe it or not, folks, we actually can have civil discourse on hot button issues. Who would’ve imagined.  If only he could convince his Hollywood cronies to understand the concept of “calmly.”

However, at the end of the day, no amount of gun control is going to change anything. It’s only going to create more victims, which is kind of the opposite of curtailing the issue. The sooner the left grasps this, the better.