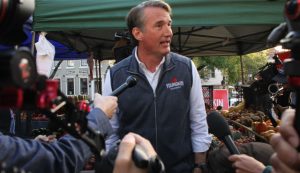 According to American Conservative Union Chairman Matt Schlapp, Republicans growing a spine and supporting the parents in Virginia as they battle against corrupt left-wing school boards trying to impose critical race theory on students, along with mask and vaccine mandates  is what helped GOP candidate Glenn Youngkin win the gubernatorial race in the state.

“I would say tonight is about a revolt from parents, moms and dads who say, ‘You know, I was OK with this idea of taking care of people, have a social safety net, compassion, and being open to immigration and stuff, but I’m not OK with them destroying my kids and propagandizing them and destroying the economy and saying America is a crappy country,” Schlapp went on to say during his conveersation with Newsmax’s Rob Schmitt and Heather Childers. “I mean, I don’t know why they thought that this woke politics would be popular.

“But there was a woke-lash tonight,” he said.

Youngkin had vowed to reject vaccine mandates if he was elected governor, pitting him in direct contrast to Democrat Terry McAuliffe and his backer, President Joe Biden, the architect of unpopular vaccine mandates.

“I’m very happy for my five daughters in Virginia that the state of Virginia isn’t going to mandate that I have to give them a shot, or that I have to teach them that America is a bad place,” Schlapp went on to tell the Newsmax hosts.

Schlapp noted parents who got a glimpse of their children’s teaching through online learning during the COVID-19 pandemic opened many eyes in Virginia about indoctrination in schools.

“They saw the CRT; they saw this craziness of gender ideologies that create confusion in the minds of young kids who they’re trying to sexualize, and then they saw the cover up in the corruption of crimes and abuses to their kids,” Schlapp went on to say.

People have grown tired of their children being indoctrinated by socialists who use the public education system as a means of evangelism for their twisted, anti-liberty causes.

Parents have the final say on what their children are being taught. This is not the right of the state. It’s the right of parents all over the country, which is a message that should not, in the slightest, be a controversial statement.