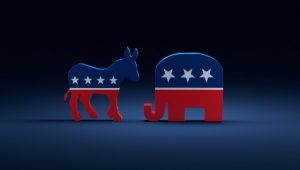 A brand new poll from Gallup has revealed that Americans’ political party preference during 2021 shifted over from the Democratic Party to the Republican Party in what is being called the largest move since Gallup started measuring party identification and leaning back in 1991.

Democrats went from having a nine-percentage-point advantage in the first quarter of 2021 to a rare five-point deficit to the Republican Party in the fourth quarter, Gallup stated.

A total of 49% of Americans considered themselves Democrat in last year’s first quarter, but that fell to 42% in the final quarter. Survey respondents identifying as Republican increased from 40% to 47% during the same period.

The survey results were based on aggregated data from all U.S. Gallup telephone surveys in 2021, which included interviews with more than 12,000 randomly sampled adults.

“Gallup said that both the nine-point Democrat advantage in the first quarter and the five-point Republican edge in the fourth quarter were among the largest it had measured for each party in any quarter since 1991,” Newsmax reported.

Is it any wonder?

Look at how crazy folks on the left have become since the start of the COVID-19 pandemic? All of the shutdowns, insanity, and misinformation concerning the coronavirus has led to a lot of eyes being opened in America.