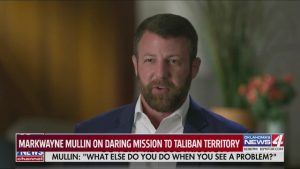 A congressman from Oklahoma was all over the news when he tried to take an unsanctioned trip to Afghanistan has now revealed that an American family he tried to get out of the country has finally been rescued.

Folks, this is what an American hero looks like. We need more men like him serving this country in a political capacity.

Rep. Markwayne Mullin, a Republican, revealed the news on Twitter , saying that the woman, Mariam, and her three children had been evacuated from the country on Monday morning. Mullin said he had received an email from a friend that said Mariam and her children were stuck in Afghanistan, and he spent the last two weeks with his team trying to help get her and others out of the country.

Mullin claimed that Mariam had taken her children to Afghanistan so they could visit their grandparents for the first time, but when the Taliban took over, they got stuck in Kabul. The family got out of Afghanistan at 05:32 EDT on Monday.

“We worked around the clock,” Mullin went on to say in a post on Twitter. “But despite the many frustrating setbacks, the team I have been blessed to work with never gave up. Mariam and the kids have been through so much, literally looking death in the face multiple times, including again today, but they never gave up either.”

Mullin said that while it was wonderful that Mariam’s family had been evacuated, there are still many other families who want to get out of the country and that America cannot rest until all of them are home.

The congressman tried to take his trip after two other folks in Congress, Rep. Peter Meijer of Michigan, a Republican, and Rep. Seth Moulton, a Democrat, took trips of their own. Neither House Speaker Nancy Pelosi or House Minority Leader Kevin McCarthy were happy about the trips, going on to discourage any further attempts to get over to Afghanistan.

When speaking of the trip he took last week, Mullin made it clear he didn’t think of himself as a cowboy, saying, “I’m Not Rambo.”