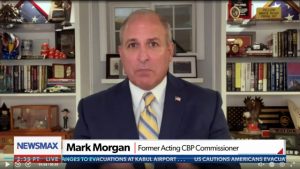 Former acting Customs and Border Patrol Commissioner Mark Morgan recently sat down with Newsmax for an interview where he went on to slam Vice President Kamala Harris for being missing in action concerning the issues unfolding in Afghanistan, going on to say it “shouldn’t be surprising” that she’s keeping her distance from President Biden and the rest of the administration.

“Since the first day she was appointed a border czar (she has) tried to do everything to distance herself as far as she could with respect to what’s going on in our own borders,” said Morgan, who served in his position as commissioner under former President Donald Trump, during his chat on Newsmax’s “The Count.”

Harris ended up traveling to the Northern Triangle countries in Central America rather than to visit the border here in the United States, and only made a border trip after Trump said he was going to tour sites, said Morgan.

Even then, Morgan said, Harris “didn’t go to the physical border.”

And now, the vice president has been largely quiet on the growing situation in Afghanistan, not making any appearances until Friday, when she stood silent and masked, behind Biden as he addressed the nation.

“We’ve been saying since day one that they’ve been misdirecting and spinning and quite frankly, Biden lied to the American people about the southwest border…and now Afghanistan’s the same thing,” Morgan went on to explain. “We’re seeing it unfold in front of our eyes, that they’re still continuing to lie to the American people.”

Meanwhile, the southern border is “wide open” due to the awful policies of the Biden administration and because of that, criminals are pouring through, Morgan went on to say.

“Just like the cartels, terrorist organizations resolve to do harm to the United States is stronger than ever,” the former commissioner said. “They’re looking for opportunities to exploit, they’ve been looking for vulnerabilities and they’re going to find it in our southwest border.”

And as if that isn’t bad enough, Border Patrol resources are being yanked away and that’s allowing hundreds of thousands of folks to cross into the country illegally.

“This fiscal year after (having) illegal aliens from 140 different countries, you don’t think that this is a real threat with respect to our national security?” Morgan said in conclusion. “Of course it is and nobody out there wants to give the ‘I told you so’ speech.”