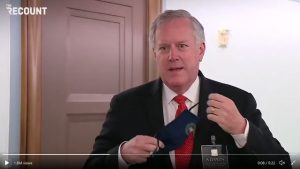 Former White House chief of staff Mark Meadows spoke with Newsmax On Tuesday, just ahead of a planned House vote to refer him over to the Justice Department for contempt of Congress charges, stating the moves are “disappointing but not unexpected,” adding that he’s “not aware” that “anybody at the White House” knew ahead of time about the riot that took place at the Capitol on Jan. 6.

“Their agenda is not really about me,” Meadows said during an interview with Newsmax’s “Wake Up America.” “This is not about holding me in contempt. This is more about Donald Trump and trying to come after him.”

Monday, all nine members of the House’s select committee investigating the Jan. 6 incidents at the Capitol voted to recommend the criminal charges against Meadows, who has declined to appear before the committee for depositions after he was subpoenaed.

Their vote set up Tuesday’s House vote, which will likely be approved by the Democrat-controlled chamber. Meadows, who served in the House for more than seven years before joining the Trump administration in 2020, has sued both the committee and House Speaker Nancy Pelosi.

Meadows has turned over some documents but has held back others, saying they fall under executive privilege guidelines.

He told Newsmax Tuesday that he’s been “very consistent from day one” that he would honor former President Trump’s executive privilege.

“I believe it’s his to waive and not mine,” said the former chief of staff. “It’s certainly not Congress’.”

Meadows then denied on Tuesday that immunity in his case was ever an option for him, going on to insist that the former president “acted in a prudent way” on Jan. 6.

“I can tell you that when it comes to condemning the violence and having any advanced knowledge that a security breach of the Capitol was happening, I’m not aware of anybody at the White House that had any knowledge of that before it happened. Obviously, we condemn that,” Meadows remarked.

He then said that his stance with the committee changed after it became “very obvious” that this investigation was going to “delve into personal conversations” that he’d had with the former president.

“It was not off-limits,” Meadows commented. “They were going to continue to press that. That was the central focus of the questions that they provided to us.”

“Meadows also defended having received text messages on Jan. 6 from Fox News personalities Sean Hannity, Laura Ingraham, and Brian Kilmeade urging him to convince Trump to intercede and stop the actions that were happening at the Capitol,” Newsmax reported.

“According to the records, multiple Fox News hosts knew the president needed to act immediately,” Cheney went on to say. “They texted Mark Meadows, and he has turned over those texts.”

However, Meadows was quick to fire off a response, saying, “There is no problem here, I can tell you,” Meadows said during the interview on Newsmax Tuesday. “A number of people were concerned about the violence.”

“All of us were, including the president, the entire nation, so there’s no problem here as much as there is a selective disclosure of certain text, trying to feed a narrative that the Jan. 6 committee wants to put forth, and it’s this conspiracy that somehow the Jan. 6 breach of the Capitol was somehow a planned effort from the White House, and that’s just simply not the case. I think the text messages show that,” he added.