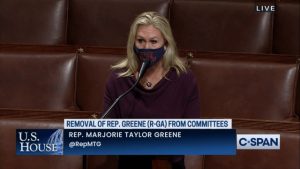 Rep. Marjorie Taylor Greene, a Republican from Georgia, recently stated that Americans will understand what the “big lie” really means once the truth comes out from an audit of ballots in Fulton County, Georgia.

“When the truth about the election comes out from the Fulton County audit in my home state of Georgia, people will finally know what the big lie really means,” she stated in the post.

Former President Donald Trump has shot back at opponents and the mainstream, saying the 2020 election result will forever be known as “the big lie.”

Meanwhile, Greene has sparked controversy in the past over her comments. In February, members of the House voted 230-199, with 11 Republicans siding with all Democrats, to remove her from the Education and Labor and Budget committees over comments she made on social media supporting QAnon theories in 2018.

Greene went on to say that the move to kick her off the committees over her social media comments was “hypocritical” when folks are still “devastated” by the protests last year.