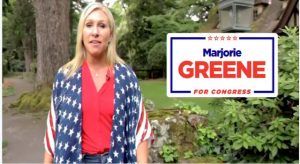 Rep. Marjorie Taylor Greene, a Republican from Georgia, said that former President Donald Trump adviser Steve Bannon is absolutely the “wrong guy” for Democrats to pick on, noting that she believes the two-count indictment for contempt of Congress he faces right now will “definitely backfire” on the left.

“What you’re seeing is communism in action and we’re not used to it in America,” Greene stated during a conversation she had on Monday’s “The Chris Salcedo Show.” “But this is what they do in communist countries. They silence their political opponents by terrifying and threatening everyone across the country. This is what they’re doing with Steve Bannon.”

Bannon walked out of a federal courthouse Monday, vowing to fight.

“I’m telling you right now, this is going to be the misdemeanor from hell for [Attorney General] Merrick Garland, Nancy Pelosi, and Joe Biden,” Bannon went on to say. “And we’re going to go on the offense. We’re tired of playing defense.”

“I’m never going to back down. They took on the wrong guy this time,” he continued.

Greene agreed with Bannon’s comments, going on to tell Chris Salcedo, “They have picked on the wrong guy, because Steve Bannon will not go quietly. And as a matter of fact, he’s going to fight back. And that’s why we love him so much.”

Going on to call herself “Team Bannon all the way,” Greene then stated that what happened to the former Trump adviser is “an outrage. It should never happen in our country, just like President Trump said.”

“I know America will be standing by Steve Bannon,” Greene concluded. “This will definitely backfire on the communist Democrats.”