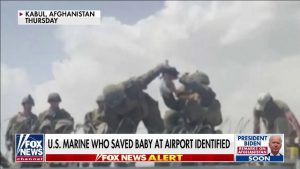 Hunter Clark, the U.S. Marine who was photographed saving an infant by lifting the child over the walls outside the airport in Kabul, is apparently now being investigated after appearing with former President Donald Trump at a recent rally.

Clark, who is a lance corporal, was one of the troops who was dedicated to guarding the airport last month, was captured in a video standing on the wall as a man in the crowd below attempted desperately to hand the child to him.

He appeared on stage with Trump at a “Save America Rally” on Saturday in Perry, Georgia. Now, his command is investigating whether the appearance violated the military ban on active-duty troops getting involved in partisan political activity, the outlet said.

“The 24th Marine Expeditionary Unit (MEU) has initiated a command investigation regarding LCpl Hunter Clark’s attendance at the event last weekend to determine if any DoD policies were violated,” Capt. Kelton Cochran, who serves as a spokesman for the 24th MEU, went on to say regarding the situation. “Any details pertaining to this incident are not releasable while the investigation is being conducted.”

Cochran did not detail which policies he was referring to.

During the rally, Trump praised Clark while bringing him onstage, according to Fox News.

Clark himself spoke to the crowd saying, “Hey, my name is Lance Corporal Hunter Clark, and I’m here from Warner Robbins, Georgia. I am the guy that pulled the baby over the wall, and it’s definitely probably one of the greatest things I’ve done in my entire life.”

“I just want to thank all the support from all y’all. It really means a lot and I’m glad to be home now,” he added.

After he made those remarks, Clark then shook hands with the former president and exited the stage.

Clark was not wearing his uniform at the time of the event, nor did he do any campaigning for a political candidate during his appearance.

This, once again, looks like an attempt by the radical left to soil someone based on arbitrary actions. How shameful.