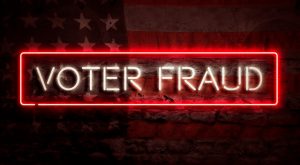 Just one day before Arizona Senate President Karen Fann was due to hold a special meeting concerning the Maricopa County election audit, officials working for the county came out with a letter that rips into Fann’s efforts at trying to preserve election integrity as coming off as amateurish.

The Board Of Supervisors swung heavy hands at the whole audit on Monday during their very own special meeting which was held to respond to Fann’s recent allegations that the contractors carrying out the audit have found significant irregularities along with missing data.

Maricopa County’s Twitter feed joined the fray, sharing portions from a formal letter signed by the five supervisors, Recorder Stephen Richer and Sheriff Paul Penzone, responding to Fann’s May 12 letter. The Senate president was not happy to learn about the letter from a reporter who had an early print copy.

“NO deleted files,” the county’s tweet thread begins. “NO chain of custody issues. We provided what they asked for except for routers, for security reasons. ‘Auditors’ trouble locating info we provided is THEIR problem.”

Neither Fann’s office nor the Senate Republican Caucus responded to Just the News queries seeking more information about one of her letter’s more explosive claims: that contractors found a “significant number of instances” where the number of ballots in a batch did not match the total on its “pink report slip.”

The vicious assault on the audit did not stop there. The letter also said that discrepancies discovered by the audit were due to the fact that some of the ballots were damaged and are duplicated for bipartisan review boards.

“[I]t is obvious that your contractors have no understanding of these matters,” the letter states.

The county election department released its own technical analysis of Fann’s allegations. “Maricopa County did not spoil any evidence,” and the issues identified by Fann “are either incorrect” or have a “reasonable and valid explanation,” the letter says.

It seems like the officials who work for Maricopa County are getting very, very defensive about this whole audit thing, doesn’t it? Wonder what it is about the idea of double checking to ensure election integrity is upheld that sets them so on edge?

Could it be they are afraid of the auditors finding something? That’s possible. Or they just might naturally be cranky. Who knows? We’ll all have to wait for the final results from the audit.