Marianne Williamson Proposes New “Department Of Peace,” Gets Called Out For “Gendered” Imagery 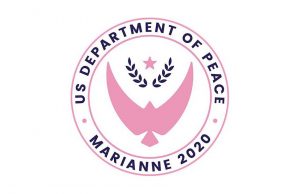 For all her flaws and issues, you can’t fault Ms. Williamson for adding positive, healing energy and good vibes and really just cleansing the aura of the 2020 Dem sideshow, man.

I can’t say all of that with a straight face, sorry y’all. My aura must need a good cleansing.

Still, Ms. Williamson brings an element of hippie woo to the table that has undeniable entertainment value.

Her latest offering is a radical solution to end the violence and war that has plagued mankind since Genesis 4. What could it be? An end to big government? Halting all interference with the leadership other sovereign countries through the CIA? A good, stern talking-to?

No, folks, Ms. Williamson’s answer is another government agency!

In a tweet yesterday, Williamson announced her plan to form the U.S. Department of Peace should hell’s temps start dipping and she be elected president:

On her campaign website, Team Wooiamson fleshed out the DoP plan a bit further:

Both domestically and internationally, we must dramatically ramp up the use of proven powers of peace-building, including dialogue, mediation, conflict resolution, economic and social development, restorative justice, public health approaches to violence prevention, trauma-informed systems of care, social and emotional learning in schools, and many others.

“I believe our country’s way of dealing with security issues is increasingly obsolete. We have the finest military force in the world, however, we can no longer rely on force alone to rid ourselves of international enemies. The planet has become too small for that, and in so doing, we overburden our military by asking them to compensate for the other work that we choose not to do. We are less effective, and less secure, because of those choices,” said Williamson.

Yeah, I don’t get it. Maybe I need more coffee. People of Twitter™, help us out!

Does this involve superior firepower? https://t.co/9uy9Z8tmKx

Considering the fact that Williamson has promised to not only ban “assault weapons,” but also the manufacture and sale of bullets as president, the answer is probably a “yes,” unless she plans to strip everyone’s Second Amendment rights with “nonviolent dispute resolution.”

2) Dennis Kucinich already did this stupid thing over a decade ago. https://t.co/nh43ep7Elx

Whatever, she’s probably only ever heard American Beauty.

We already have a Department of Peace.

But their logo isn’t pink, so that totally doesn’t count. However, the pink mockup Marianne has offered to the public did stir up a little controversy from ultra-woke congressional candidate Brianna Wu for invoking “gendered” images.

100 percent for the idea of a Department of Peace.

But I think making this logo pink sends unhelpful gendered messages. It makes peace seem like a feminine idea, when it’s an interest irrespective of gender.

I think green would be a better color. Growth. Nature. Positivity.

It must not have registered in Wu’s reality that pink is Williamson’s campaign color and, obviously, this is a mockup and would more than likely not reflect the colors (or even final image) of the official seal of such a department should a leprechaun riding the Loch Ness monster come to Washington D.C. to cut the ribbon on the would-be department’s headquarters.

Still, it adds to the humor one must find in this situation to keep from weeping and wailing that this is how far America has fallen.