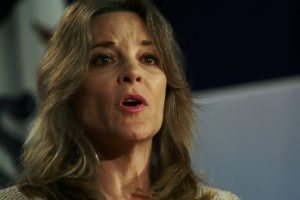 I’d like to take a moment to admit a guilty pleasure of mine.

No, it’s not Hallmark’s crappy Christmas movies. One of my favorite pastimes is watching the hilarious reactions from people who don’t know satire when they read it.

So imagine my delight when I stumbled upon this little gem from New York Magazine’s Yashar Ali:

This is a woman who gets furious when she’s told that she’s unserious and not prepared to run. pic.twitter.com/3uC8Nqfidj

The super-serious candidate said there was “something deeply sinister about Trump pardoning Charles Manson, even posthumously. Dog whistles of the very worst possible kind…”

Y’all know I’m not a huge fan of Snopes, but it looks like they could have been helpful here.

The origins of the claim that President Trump gave a posthumous pardon to the nation’s most infamous serial killer lie can be traced back to Moron Majority, a progressive political satire blog that is probably enjoying more hits than it ever has thanks to Williamson’s gaffe.

Here’s a snippet of the content that Williamson thought was legit:

Asked why he would pardon one of the most hated criminals in American history, Trump replied, “I always thought Charlie got a bum rap. He never killed anyone. It was his followers who committed the crimes.”

Some are speculating this latest pardon is just another one of Trump’s outrageous acts meant to distract the American public from the ongoing impeachment proceedings. Others believe it is a setup to the much-anticipated pardon of his good friend and self-proclaimed “dirty trickster,” Roger Stone.

Said an anonymous source, “If you look at the piddling crimes he was convicted of … obstruction of justice, lying to Congress and witness tampering, it will make Roger’s pardon less odious in comparison.”

Fighting back against his detractors, Trump added he has every right to issue pardons.

“The Constitution, and William Barr, give me the right to do whatever I want,” declared a resolute Trump.

Seriously, guys. She thought that was real. And she wants to be president.

When a follower of hers expressed shock at the fake news flash, Williamson simply responded, “Yep.”

Williamson quickly deleted the tweet. She issued a correction, stating, “I erroneously tweeted that President Trump had posthumously pardoned Charles Manson. Glad To have been wrong.”

For some indiscernible reason, however, she deleted her clarification tweet as well.

Maybe Ms. Williamson could run for Congress instead. They could always use someone with a healthy dose of ineptitude.