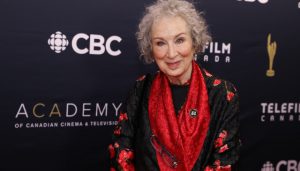 There’s just no satisfying the super woke crowd, a lesson that “The Handmaid’s Tale,” Margaret Atwood, who is a feminist, is learning the hard way.

Atwood took some flack online after she shared an article in a tweet from a person who questions the use of gender-neutral language. The article, titled, “Why can’t we say ‘woman’ anymore?” was written by Rosie DiManno, immediately starts off by taking some very well known lyrics about women and replaces them with some of the ridiculously stupid terms used by the super woke:

“You Make Me Feel Like a Natural Person with a Vagina.”

“Oh, Pretty Person with a Cervix”

DiManno then makes the argument that inclusion is a worthy goal, but erasing women in the process of making it happen causes serious harm.

Atwood simply tweeted out the article, without adding her own comment. This led to a backlash from fans online, The Daily Beast reported, including mocking comments: “Oh no you’re right I just tried to say it and a bunch of non-binary people stormed into my apartment and made me throw out my dresses.”

Atwood tweeted the article on Tuesday and spent time that day responding to those angry at her for sharing it, mostly telling them to actually read the piece before responding. She also at one point said DiManno is “not a terf,” a term that means “trans-exclusionary radical feminist” and has been used to dismiss feminist opinions about transgender issues that don’t align with current woke orthodoxy.

As The Daily Wire has reported, this is not the first time feminists have turned against Atwood for not standing in lock-step with them. In January 2018, Atwood suggested the burgeoning #MeToo movement accept due process, which supporters of the movement decried as anathema to justice.

“Earlier this week, Atwood penned an introspective article in the Globe and Mail titled, ‘Am I a Bad Feminist? praising the ‘#MeToo movement for taking down longtime alleged sexual aggressors like Harvey Weinstein, and calling the movement ‘a massive wake up call’ for powerful men who saw themselves as untouchable,” the Daily Wire reported.

“But Atwood went on to criticize #MeToo, claiming that vigilante justice — making claims about harassment and then demanding men be punished without trial, destroying careers and ending families — violated the accepted civilizational norm of affording due process, and turned radical feminists into tyrants,” the DW report continued.

“If the legal system is bypassed because it is seen as ineffectual, what will take its place? Who will be the new power brokers?” Atwood went on to say in her piece, comparing the support she offered to her colleague as he faced down allegations of sexual harassment to taking a stand by those who were accused during the Salem Witch Trials.

“The public — including me — was left with the impression that this man was a violent serial rapist, and everyone was free to attack him publicly, since under the agreement he had signed, he couldn’t say anything to defend himself,” the author added. “A fair-minded person would now withhold judgment as to guilt until the report and the evidence are available for us to see.”

The feminist author was then accused of “warring against women” for daring to make the suggestion that mobs of people do not get to accuse and judge someone without evidence or the chance to defend themselves.