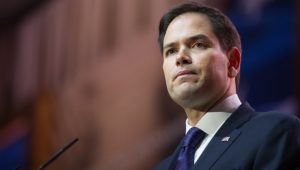 Florida Sen. Marco Rubio recently referred to Democratic presidential nominee Joe Biden as “president-elect,” despite the fact that the results of the 2020 presidential election have yet to be certified.

Last week, the mainstream media called the race for Biden, but there are many lawsuits and recounts still pending that could alter the overall results of the election.

Rubio made the reference on Monday when asked by Capitol Hill pool reporters what he thought of the reports that Biden is considering independent Maine Sen. Angus King to be the next director of national intelligence in his administration.

“Well, that’ll be the president-elect’s decision obviously,” Rubio answered, according to NPR. The senator was asked about his use of the term “president-elect,” and he responded, “Ultimately that’s what the results, the preliminary results, seem to indicate. You certainly have to anticipate if that’s the highest likelihood at this point. But obviously the president has legal claims in court, and he’ll continue to pursue those, and if that changes, obviously, it’ll be something we’ll have to deal with.”

To date, only a handful of Republican senators have publicly congratulated Biden on his victory. Sens. Susan Collins of Maine, Lisa Murkowski of Alaska, Ben Sasse of Nebraska, and Mitt Romney of Utah, all of whom have faced the president’s wrath at some point during his one term in office, have congratulated the former vice president.

Contrary to what lots of folks think, the mainstream media aren’t the ones who declare a victor in the presidential election. Their calls are just projections.

We’re still waiting for the real results to be completely verified and certified. Until then, it might be a good idea for folks to stop referring to Joe Biden as “president-elect.”

It’s not over until it’s over.