March for Our Lives Co-Founder Quits, Says He’s Said Things He Regrets and Realizes He “Doesn’t Know Everything” 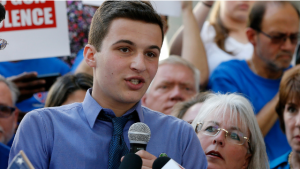 Good God almighty, there is hope for the Tide Pod generation after all.

Cameron Kasky, one of the Marjorie Stoneman Douglas High School students who co-founded the March for Our Lives and spent the majority of their senior year talking to CNN and being invited to lavish events put on by the gun-grabbing elite, has announced he is quitting the March for Lives and has, stunningly, learned that he doesn’t no everything.

We could have told all those kids that they were 17 and didn’t know everything, but I absolutely take my hat off to him and give him full credit for being willing to admit this to himself–most teenagers don’t realize they don’t know everything until they’re well into his twenties, so good for him. And I’m being completely serious, I really do admire the kid.

Speaking with Fox News Radio, he explained the regrets he has for things he said to Senator Rubio during that fateful CNN Townhall media circus, the respect he gained for gun owners and pro-life women while touring the country, and his interest in encouraging a bipartisan conversation.

On Senator Rubio, he says:

I’m very regretful of a lot of the mistakes that I’ve made along the way. One of the things I never really did was watch myself. If I was on a screen I kind of tried to run away from it. I’m not entirely sure why. But, looking back on that it’s like you said, you touched off on this very well in the intro, I’m not going to kick myself for it because I’m 17. Despite the fact that I thought I did at the time, I don’t know everything. But, I look back on that and I say, you know what, there were people who had just been buried and when you’re looking at somebody that you find might in some way have been complicit in this murderer obtaining the weapon it’s hard not to say something like that. But, I went into that wanting less conversation and more to embarrass Rubio and that was my biggest flaw.

He also said he regretting using the name of the young man who opened fire in his high school in Parkland, Florida on February 14, 2018, and wishes he hadn’t contributed to building the shooter’s celebrity.

While touring the country, he says, it dawned on him that a lot of our national debates come from a simple lack of willingness to listen:

This summer when March For Our Lives went on the summer tour that we embarked on I met that person in Texas whose got that semi-automatic weapon because that’s how they like to protect their family. I met the 50 some odd percent of woman who are pro-life, even though I thought it was preposterous that a woman could be pro-life and not pro-choice at the time. I learned that a lot of our issues politically come from a lack of understanding of other perspectives and also the fact that so often young conservatives and young liberals will go into debate, like I said earlier, trying to beat the other one as oppose to come to an agreement…I’m working on some efforts to encourage bipartisanship or at least discussion that is productive and help a lot of people avoid the mistakes that I made.

While it sounds like he’s far from turned against his buddies over at the March for Life, he says he’s completely removed himself from the organization because he no longer considers himself knowledgeable enough to participate in what he views as a “great responsibility.”

I left the organization and if I thought that my friends and the people I worked with couldn’t do it without me I would not have done that, but alas all of our efforts looking forward looked like they didn’t really need my involvement and while I could have helped it wasn’t crucial. You know what I thought in some of the platforms that I have for only the worst reasons is something I really believe in, because I’m a Spider man fan, and I can tell you with great platform comes great responsibility. I thought it was my responsibility to take all the things I was kicking myself for and to encourage others to avoid it.

Smart kid–ironically, I think he’s probably got a much more productive future than the rest of the kids associated with the March, who most likely still believe they know everything at 17.