The Many “Races” of People Issue 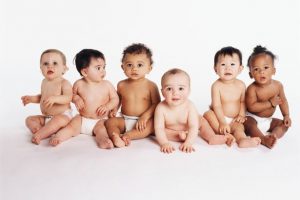 In light of current events, with emphasis upon the color of a person’s skin, and assertions of racial superiority,  and the suggestions by some that we are facing a “race war,”  we need to cut through the morass of false news and views and get to the real issue and its only answer.

In a recent conversation with a dear friend, I was asked, “Where did all the races of people come from?” Attempting to answer from a biblical perspective, I countered with the question, “How many “races” of people are there?” And the answer to this question is only one – the human race. Paul writes in Acts 17:26, “…that God has made of one blood, all nations of men for to dwell on all the face of the earth, and has determined the times before appointed, and the bounds of their habitation.” Tim Keller, commenting on this verse observes, “Paul’s Greek listeners saw other races as barbarian, but against such views of racial superiority Paul makes the case that all races have the same Creator and are of one stock. Since all are made in God’s image, every human life is of infinite and equal value (Genesis 9:5–6). One main effect of the gospel is to shatter the racial barriers that separate people (Galatians 3:28; Ephesians 2:14–18), so it is an egregious sin to do anything to support those barriers. When Peter sought to do so, Paul reprimanded him for losing his grasp on the gospel (Galatians 2:14).”

The fact is the Bible does not use the word race at all in reference to people, but it does describe all human beings as being of “one blood” (Acts 17:26). This of course emphasizes that we are all related, as all humans are descendants of the first man, Adam (1 Cor. 15:45), who was created in the image of God (Genesis 1:26–27). The Last Adam, Jesus Christ (1 Corinthians 15:45) also became a descendant of Adam. Any descendant of Adam can be saved because our mutual relative by blood (Jesus Christ) died and rose again. This is why the gospel can (and should) be preached to all tribes and nations.

In the 1800s, before Darwinian evolution was popularized, most people, when talking about “races,” would be referring to such groups as the “English race,” “Irish race,” and so on. However, this all changed in 1859 when Charles Darwin published his book On the Origin of Species by Means of Natural Selection or the Preservation of Favored Races in the Struggle for Life.

Darwinian evolution was (and still is) inherently a racist philosophy, teaching that different groups or “races” of people evolved at different times and rates, so some groups are more like their apelike ancestors than others. However, all human beings in the world today are classified as Homo sapiens. Scientists today admit that, biologically, there really is only one race of humans. For instance, a scientist at the Advancement of Science Convention in Atlanta stated, “Race is a social construct derived mainly from perceptions conditioned by events of recorded history, and it has no basic biological reality.”

Those working on mapping the human genome announced “that they had put together a draft of the entire sequence of the human genome, and the researchers had unanimously declared, there is only one race — the human race.”

Pastor Doug Wilson pinpoints the real issue in the recent “Charlottesville” clash: “The central problem with the white supremacists in Charlottesville is not so much that they hate blacks and Jews. Their central problem is that they hate God, and hate Jesus Christ. And the same thing goes for the anitfa agitators on the other side of the street. Scripture tells us what the emotional weather is always like outside of Jesus Christ. “For we ourselves also were sometimes foolish, disobedient, deceived, serving divers lusts and pleasures, living in malice and envy, hateful, and hating one another” (Titus 3:3).

“There is no way out of this apart from real repentance. God sent His Son into this world, in part, in order to solve the most intractable of problems — that of ethnic animosity. Christ was sent in order to overcome the division between Jew and Gentile, to create one new man out of two (Ephesians 2:15), and the chasm between those two groups was a true chasm. “Neither is there salvation in any other: for there is none other name under heaven given among men, whereby we must be saved” (Acts 4:12). We are commanded to repent, and we are commanded to repent by Jesus. We cannot do anything resembling this if we persist in our refusal to name His name. We must come to hate our sin, which means naming it, and we must come to love Jesus, which means naming Him.

“Refuse to do that and the only thing you have to look forward to is an ever-increasing cycle of hatreds, spilling out of hearts and into the streets. These racial animosities are not a sin against America, or democracy, or our social fabric. They are a sin against God.

“So every form of race-hustling, independent of which race might be receiving the benefits of that hustle, is detestable to God. Every form of race baiting is detestable to God. Every form of racial biting is detestable to God. And this includes, incidentally, the “lite” forms of race-hustling, race-baiting, and racial biting that have somehow become acceptable within the church. But Christ-less alt-right thinking defiles the sanctuary. Christ-less grievance politics defile the sanctuary. There are those who hustle outside the church, and there are those who shamble and shuffle inside it, playing the same game at a slow enough speed to be palatable to evangelicals. But do not ask how fast it is going. Ask rather what direction it is going. There are only two directions –the New Jerusalem or the Abyss (Hell).”

The truth taught in the Bible is that although there are many ethnic or people groups, there are actually only two groups of human beings: Those in the first Adam, which is all mankind by natural birth and those in the Last Adam – Christ –which are those who have been recipients of the new birth. All of your history can be summed up, not in terms of BC and AD, but in terms of IC or OC, i.e. In Christ or Outside of Christ.

The real problem in our world is not skin color, but our sinful condition and the only cure for this is in the gospel of God.

Where are you situated – in the First Adam – Then you are lost – lost to true identity, to real security, to heavenly dignity, and to ultimate destiny? In the Last Adam – Then you are saved, safe, redeemed. You can reign in life, overcome in life and live forever enjoying and being employed in extending the love of God, the life of God, and the liberty in Christ, for the glory of God!