Why Do So Many Americans Have Guns? 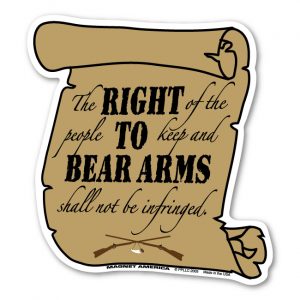 The moment we learn of another mass shooting, we know what’s coming next. Within minutes the same post-massacre drill is paraded out. Gun-control activists are on the firing line with their bullet-point arguments unloaded on the viewers while they are still in a state of shock.

After the shooting in Las Vegas, “#GunControlNow” was among the top trending hashtags on Twitter in the United States on Monday. Sen. Diane Feinstein (D-Calif.) on NBC’s “Meet the Press” called the U.S. a “gun-happy country. And I think there are many of us in growing numbers that don’t want a gun-happy country,” she said.

Reason dictates that we should disengage from this battle over firearms long enough to ask why do so many Americans have guns? And why are they so adamant in their defense of Second Amendment rights?

How many Americans have guns?

Why do so many Americans have guns?

The reason why Americans should have guns is long standing. A case in point: the third president of America, Thomas Jefferson, quoting 18th century criminologist Cesare Beccaria, wrote in 1774: “The laws that forbid the carrying of arms are laws of such a nature. They disarm only those who are neither inclined nor determined to commit crimes…. Such laws make things worse for the assaulted and better for the assailants; they serve rather to encourage than to prevent homicides, for an unarmed man may be attacked with greater confidence than an armed man.”

In a letter to Peter Carr, on August 19, 1785, Thomas Jefferson wrote: “A strong body makes the mind strong. As to the species of exercises, I advise the gun. While this gives moderate exercise to the body, it gives boldness, enterprise and independence to the mind. Games played with the ball, and others of that nature, are too violent for the body and stamp no character on the mind. Let your gun therefore be your constant companion of your walks.”

In a column entitled, The Culture of Death — and of Disdain, Peggy Noonan answers in a very articulate manner why so many Americans have so many guns:

I think a lot of Americans have guns because they’re fearful –and for damn good reason. They fear a coming chaos, and know that when it happens it will be coming to a nation that no longer coheres. They think it’s all collapsing — our society, our culture, the baseline competence of our leadership class. They see the cultural infrastructure giving way  — illegitimacy, abused children, neglect, racial tensions, kids on opioids staring at screens — and, unlike their cultural superiors, they understand the implications.

Nuts with nukes, terrorists bent on a mission. The grid will go down. One of our foes will hit us, suddenly and hard. In the end it could be hand to hand, door to door.

Americans have so many guns because drug gangs roam the streets, because they have less trust in their neighbors, because they read Cormac McCarthy’s “The Road.” Because all of their personal and financial information got hacked in the latest breach, because our country’s real overlords are in Silicon Valley and appear to be moral Martians who operate on some weird new postmodern ethical wavelength. And they’ll be the ones programming the robots that’ll soon take all the jobs! Maybe the robots will all look like Mark Zuckerberg, like those eyeless busts of Roman Emperors. Our leaders don’t even think about this technological revolution. They’re too busy with transgender rights.

The establishments and elites that create our political and entertainment culture have no idea how fragile it all is—how fragile it seems to people living normal, less privileged lives. That is because nothing is fragile for them. They’re barricaded behind the things the influential have, from good neighborhoods to security alarms, doormen and gates. They’re not dark in their imagining of the future because history has never been dark for them; it’s been sunshine, which they expect to continue. They sail on, oblivious to the legitimate anxieties of their countrymen who live near the edge.

Those who create our culture feel free to lecture normal Americans—on news shows, on late night comedy shows. Why do they have such a propensity for violence? What is their love for guns? Why do they join the National Rifle Association? The influential grind away with their disdain for their fellow Americans, whom they seem less to want to help than to dominate: Give up your gun, bake my cake, free speech isn’t free if what you’re saying triggers us.

Would it help if we tried less censure and more cultural affiliation? Might it help if we started working on problems that are real? Sure. But why lower the temperature when there’s such easy pleasure to be had in ridiculing your mindless and benighted countrymen?

Why do Americans own so many guns? Because they don’t trust the protected elites to protect them.