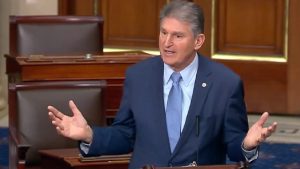 Sen. Joe Manchin, a Democrat from the state of West Virginia stated on Thursday that Democrats aren’t going to be reaching an agreement on a wide-ranging social spending bill “anytime soon,” despite the fact that there are ongoing negotiations happening within the party.

”This is not going to happen anytime soon, guys,” the Democratic senator went on to tell reporters on Thursday. ”They’re trying to get a meeting of the minds.”

He added that Democrats are making “good progress” on a deal.

”There’s a lot of details,” Manchin went on to state. ”Until you see the text and the fine print, it’s pretty hard to make final decisions.”

Sen. Kyrsten Sinema, D-Ariz., and Manchin both met with White House officials on Thursday, but Sinema told CNN’s Manu Raju, when asked if a deal would be reached by Friday, ”Don’t ask me. I can’t answer that question,” adding that ”I don’t negotiate in the press” when pushed.

Manchin added to Raju that ”everything is moving back and forth” when it comes to climate change, and said when asked if increasing revenue is the biggest hurdle that ”It’s hard money. Soft money should go to debt.”

Axios reports that in a closed-door meeting on Wednesday, Manchin and Sen. Bernie Sanders, I-Vt., had a heated argument over the spending plan.

According to Sen. Jon Tester, D-Mont., who chairs the Senate Appropriations subcommittee, there was ”a difference of opinion” over the bill.

”Joe said, ‘I’m comfortable with nothing.’ Bernie stated, adding, ‘We need to do three-and-a-half [trillion dollars].’ The truth, is both of them are in different spots.”