Man With Ax Attacks 8-Year-Old Girl, Then Police Show Up And Everything Changes 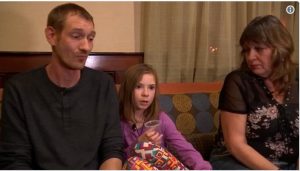 An 8-year-old girl was brutally attacked by a crazed man with an ax who murdered four people in her home, but thankfully police arrived in the nick of time and managed to rescue the girl.

Hailey Grimm recently spoke out about what happened to her and also took the time to tell police thank you for saving her life.

Hailey Grimm shared horrifying details of the moments when 42-year-old Mark Leo Gregory Gago had his hands on her neck after killing his parents, her mother and her infant sister at the rural home near Woodburn, located about 30 miles south of Portland.

The 8-year-old told FOX12 that Gago was speaking in riddles while his hands were pressed on her throat when deputies ultimately found her.

Officers then shot and killed Gago, according to the Clackamas County Sheriff Office.

“Police officers, if you’re watching this, thank you,” said Hailey.

The sheriff’s office identified the victims as Olivia Gago, 9 months; Shaina Sweitzer, 31; Jerry Bremer, 66; and Pamela Bremer, 64. When police arrived at the scene they found a woman dead outside the home and Gago attacking Hailey Grimm, who was Sweitzer’s daughter from a previous relationship.

The girl’s grandmother, Debi Barry, told the Oregonian that Gago approached Hailey with bloody hands carrying an ax before grabbing her hair and throwing her against a wall.

“She said she had a guardian angel,” she told the newspaper.

Police were later told there were numerous weapons in the residence including swords.

The sheriff’s office took an emergency call from the home at around 10:15 p.m. on Saturday. The caller described an intense, violent, and disturbing scene. Deputies who arrived on the scene described it as “horrific.”

What’s truly heartbreaking is what this young girl said about missing her mom and sister, and how she plans on being strong. This from an 8-year-old girl, folks.

“I think I’m strong because of my mommy as an angel in heaven. I think she’s gonna be my angel, she said.

Say a prayer for this sweet little girl, that she’s able to recover from all of this horror and pain inflicted on her because of this evil, vile wretch of a man.

Police did a fine job in responding to the incident and taking the proper action to neutralize the threat.