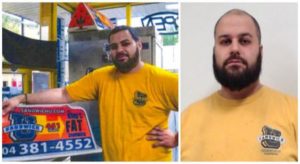 A man who was charged with assisting in the chemical spraying of Capitol Police Officer Brian Sicknick during the Capitol riot that took place on January 6 of this year has been ordered released from jail just ahead of his impending trial, as a trio of appeals court judges have concluded the district “clearly erred” in making the decision to hold him behind bars.

George Tanios, who is from West Virginia, was charged with crimes stemming from the Capitol riot and is accused of coordinating with Julian Khater of Pennsylvania, who sprayed three officers, including Sicknick, with a chemical spray as rioters attempted to break through the bike rack barrier on Capitol grounds. The men have not been charged with killing Sicknick, and no one has been charged in connection with his death. Tanios, who ran a local Sandwich U franchise, did not spray any officers and has not been accused of doing so.

Tanios had been behind bars since March after a magistrate judge and a district court judge concluded he should be locked up before his trial, but judges for the U.S. Court of Appeals for the District of Columbia Circuit disagreed.

The appeals court then went on to point out that Tanios “has no past felony convictions, no ties to any extremist organizations, and no post-January 6 criminal behavior that would otherwise show him to pose a danger to the community.”

“The appeals court panel was comprised of George H.W. Bush appointee Judge Karen Henderson, Bill Clinton appointee Judge Judith Rogers, and Donald Trump appointee Justin Walker, and the trio said that it was ‘ordered’ that the district court’s May detention order should be ‘reversed’ and the case should be sent back to the lower court to release Tanios ‘to appropriate conditions, including home detention and electronic monitoring.’ The Justice Department was given a week to request that the full appeals court take up the case,” the Washington Examiner reported.

According to the chief medical examiner’s office, Sicknick died from having two strokes, which he labeled as “natural” under causes of death. This means the narrative that stated Sicknick died from trauma to the head was false. Nor did he pass away from a chemical reaction.

L. Richard Walker, Tanios’s attorney, argued back in July that his client “did not enter the Capitol building. Tanios did not damage property, and he did not assault anyone. … Tanios is not guilty, having no knowledge of an assault, no intent to commit an assault, and no agreement to harm anyone. The District Court erred in detaining Tanios. The Government failed to prove that Tanios is a danger to the community by clear and convincing evidence.”

The Department of Justice didn’t share that view, as Channing Philips, who is the acting U.S. Attorney for the District of Columbia, argued that Tanios “aided and abetted co-defendant Julian Khater’s assault on the Capitol’s police defenders” when Khater “sprayed an unknown chemical substance directly into the faces of three unprotected officers who were guarding security barriers.”

Philips then went on to defend the decision by the district court to keep Tanios detained, stating that the judge “did not legally err in ordering detention,” but “conducted a fact bound, individualized analysis.”