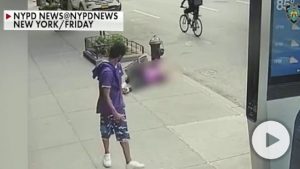 New York City has a lot of problems with crime, much of which can be traced back to horrifically bad policies put in place by the numerous Democrats in leadership at both the local and state level.

For example, criminals are getting cut loose and put back on the streets of the city, despite being arrested hundreds of times. Yes, I said hundreds. Don’t think that’s true? Well, allow me to present Exhibit A.

A man was recently busted by police after getting caught on camera viciously pushing over a 92-year-old woman. Turns out the suspect has been arrested over 103 times for sexual offenses and other petty crimes.

The elderly woman in the incident, Geraldine, suffered some minor injuries and was released from the hospital, but her mental suffering is far worse than anything done to her physically.

Geraldine says she’s now afraid to walk down the street by herself.

“Mostly I’m shaken. My head still hurts where it was bleeding, where I hit the hydrant — or where he hit me, I don’t know,” Geraldine said.

“Mainly it’s psychological — just the fear of going out on the street,” she continued.

“This damned guy put me in a state where I’m fearful to walk the streets alone. So my super’s trying to find somebody who will walk me to a park nearby or to the supermarket, that kind of thing. So that’s the problem.”

Rashid Brimmage, 31, was caught and charged with the attack. Here’s more on that from Fox News:

Brimmage was busted by cops Tuesday and charged with assault after investigators recognized him from video footage of the attack, authorities said.

The frequent offender has now been arrested 103 times since 2005 for petty crimes and sex offenses, sources said.

The creep was convicted of sexual misconduct in 2012, then arrested for two sex offenses in 2014, police sources said.

It actually gets worse. This creep was arrested in May of 2014 for exposing himself and doing other unmentionable things on a public street. A few months after that, he sexually assaulted a woman in a deli by grabbing her behind.

Three years ago Brimmage changed his address and register as a sex offender.

In other words, what in the world is this guy doing loose on the streets? He should be behind bars. For a long, long time. Heck, this man has been given enough chances. Toss him in prison and throw away the key.

It’s crazy this is being tolerated in the Big Apple.