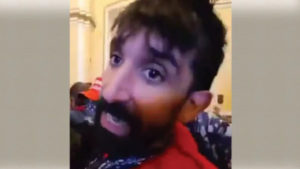 A Pennsylvania man who was waiting to be sentenced after he pleaded guilty to entering the Capitol building during the riot on Jan. 6 of last year died by suicide last Friday.

Matthew Perna pleaded guilty to charges on Dec. 9 of 2021 that were related to him going inside the Capitol building and staying there for 20 minutes during the chaos. He was not, however, charged with participating in destructive behavior or violent acts.

John Flynn Funeral Home posted up Perna’s obituary, which said that he died “of a broken heart.”

“He attended the rally on January 6, 2021, to peacefully stand up for his beliefs. After learning that the FBI was looking for him, he immediately turned himself in,” the obituary went on to say. “He entered the Capitol through a previously opened door (he did not break in as was reported) where he was ushered in by police. He didn’t break, touch, or steal anything. He did not harm anyone, as he stayed within the velvet ropes taking pictures.”

Perna was set to be sentenced in early March, but prosecutors motioned on Feb. 11 to delay his sentencing to April 1 to give them more time to ensure that all Jan. 6 defendants facing similar charges are “treated in the same manner.”

“They broke him. They mentally broke him,” Geri Perna remarked. “He had run out of hope. I know he couldn’t take it anymore.”

Perna died by hanging on Friday in his garage.

Perna and his family viewed the motion to delay sentencing for a month as bad news, according to American Greatness, which noted that the prosecutor handling Jan. 6. cases, U.S. Attorney Matthew Graves, has sought lengthy prison sentences for defendants who plead guilty to the same charges Perna pleaded guilty to.

“The constant delays in hearings, and postponements dragged out for over a year. Because of this, Matt’s heart broke and his spirit died, and many people are responsible for the pain he endured,” Perna’s obituary adds. “Matt did not have a hateful bone in his body. He embraced people of all races, income brackets, and beliefs, never once berating anyone for having different views.”

The attorneys representing Perna have not, as of this writing, responded to requests for comment.