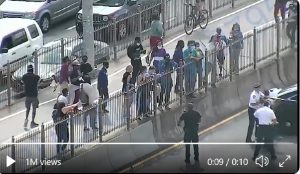 Is justice truly dead in America?

Well, let me tell you, Lady Justice sure isn’t looking too healthy at the moment, especially when society is screaming for those who work on the front line to keep us safe to be defunded and abolished altogether.

And when you see the justice system actually assisting criminals who assault those same heroes, you can almost guarantee the clock is ticking on how long society can last.

A man who allegedly assaulted three police officials in New York City has been released from jail without bail.

Welcome to the New America, folks.

“Quran Campbell, 25, is accused of socking the highest-ranking uniformed cop [NYPD Chief Terence Monahan] several times in the face as Monahan tried to arrest him after Campbell had allegedly punched another NYPD officer and lieutenant” near the Manhattan approach to the Brooklyn Bridge, The New York Post reported.

The Post noted that a second man, 25-year-old Banks Shaborn, was also arrested for allegedly “clocking the same lieutenant, Richard Mack, of the department’s Strategic Response Group, multiple times in the face during the scuffle.”

Mack’s orbital bones were broken in the altercation.

“They are part of this anarchist group that has been infiltrating this Black Lives movement since the beginning,” Monahan said. “This is what we dealt with since the first protest after George Floyd. It is a legitimate movement, but it is being hijacked by these anarchists, and they are the ones that have been attacking our police officers [and] are out hiding behind the many, many peaceful protesters that are out there.”

There was a video of the fight posted to the Twitter account of the NYPD. Footage captured the moment when the unidentified man violently assaulted police officers with a cane while they were attempting to make an arrest.

This is not peaceful protest, this will not be tolerated. pic.twitter.com/cYuDX8G7ku

Folks, this violence against one another has got to stop. We’re allowing the left to win by hating each other, by assaulting one another. This is what they want.

Please. Respect law enforcement officers in your community. The vast majority of cops are good men and women who simply want to protect the communities they serve and ensure people can live their lives in peace. Let’s assist in that work instead of adding to the misery.