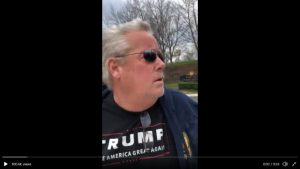 A man was caught on video “forcefully exhaling” on two women outside of a golf course owned by President Donald Trump in the state of Virginia. The incident led to the man being charged with assault.

Raymond Deskins, 61, was charged with misdemeanor assault after a citizen was able to get a warrant through the county magistrate, according to reports from the Loudoun County Sheriff’s Office.

Videos that went viral on social media show Deskins blowing air on two women after one of them asks him to move farther away because he is not wearing a mask.

Trump supporter forcefully exhaling without a mask on a protester outside the Trump National Golf Club, Nov. 21, 2020 pic.twitter.com/Bq2mMH1At0

“That’s assault,” one of the women says after Deskins blows on them.

“I breathed on you,” says Deskins, who was wearing a Trump “Make America Great Again” shirt and had inflatable pool toy with Trump’s likeness around his waist. “Yeah, call the cops and ask them to come get me.”

In the state of Virginia, regulations are in place that require residents to wear masks inside stores and other indoor places, but not outside.

The incident took place on Saturday outside of Trump National Golf Club. President Trump was there on the course shooting a few holes. The place has become a regular hang out for folks to protest, either for or against the president.

“Several members of the Loudoun County Board of Supervisors sent a letter to law enforcement authorities Sunday asking for a full investigation,” the AP wrote in its report. “The letter said the two women had been protesting the president outside the golf club.”

The county sheriff’s office agreed to conduct an investigation at the scene of the incident, but due to the fact it wasn’t directly witnessed by law enforcement, they advised the two women to seek a warrant through a county magistrate.

Update on video circulating on social media after an incident near Trump National Golf Club. pic.twitter.com/NFnbmOnYRi

So apparently it’s now assault to breathe on someone. This is what life is like in the age of COVID-19. People, especially on the left, are finding all kinds of creative ways to weaponize this virus and use it against people they deem their political enemies.

Sad that fear has gripped people so deeply that this is now becoming a normal reaction.