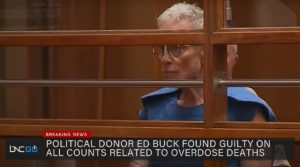 Well known Democratic donor Ed Buck, who is also a pretty close friend of twice-failed presidential candidate Hillary Clinton, has been convicted in the deaths of two black man after supplying them with fatal doses of methamphetamine at his apartment located in West Hollywood.

A federal jury found him guilty of all nine felony counts he was charged with, as prosecutors put together a case of an “older white man using his power and money to exploit the poverty and drug addiction” of young, gay black men.

Buck, who is 66,  now faces a mandatory sentence of 20 years in a federal prison. He could potentially end up with a maximum of life in prison.

The Justice Department said in a statement that “Buck exerted power and control over his victims, typically targeting individuals who were destitute, homeless or struggling with drug addiction.”

The statement added that “he exploited the wealth and power balance between them by offering his victims money to use drugs and to let Buck inject them with narcotics.”

Prosecutors said he solicited his victims in different ways, including using social media platforms, dating and escort websites, or through referrals from his prior victims, including individuals he hired to do other work for him.

Joyce Jackson, sister of the other man who died at the hands of Buck in 2019, Timothy Dean, thanked her supporters, saying “Finally, Ed Buck will never harm anyone else, and I thank God for that.”

Originally, the two black men’s deaths were determined to be accidental. However, after many different LGBTQ and civil rights groups encouraged police to look into allegations that Buck had a well established pattern of luring gay black men into his apartment to inject them with crystal meth for his own personal sexual pleasure.