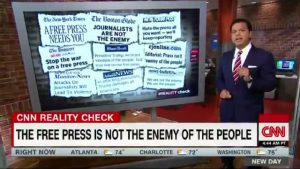 If you think about it, it’s actually pretty hilarious that the mainstream media gets their panties so twisted over Trump’s claim that “fake news is the enemy of the people.”

Isn’t getting offended by this claim as good as an admission that they are, indeed, fake news?

Still, either willfully ignoring or blissfully unaware of the hilarious irony, hundreds of mainstream media forces joined together this week to share the same sentiment that the press is still independent.

If it's a #FreePress, how come you're all saying the same thing? https://t.co/uzf1qT14cv

"Free press gets a boost from people who voted to change the #1A to allow the govt to ban a documentary critical of Hillary" https://t.co/RQcEQCCnuK

The only press outlets under attack are independent media – under attack from the very same blue check marks & mainstream corporate networks whining about press freedoms.

The sheer audacity of their hypocrisy.#FreePress

Even POTUS himself weighed in, clarifying once and for all what dummies the mainstream media are: