MAGA INTENSIFIES: Kanye West Set to Dine at the White House With Trump 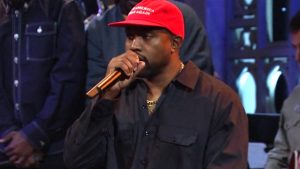 Despite the mockery of the vast majority of the entertainment industry and the left-wing media (although the lines blur between these two categories), Kanye West is not backing down from his public support for Trump, with whom he claims he shares a “dragon energy.”

Following a controversial, um, speech on the importance of intellectual liberty, while donning a red MAGA hat during an appearance on SNL last week, West is now set to eat lunch with the President on Thursday to discuss a number of issues that are important to the rapper.

“Topics of discussions will include manufacturing resurgence in America, prison reform, how to prevent gang violence, and what can be done to reduce violence in Chicago,” Sanders said, according to The Daily Wire.

Sanders also said that West will spend some time meeting with Jared Kushner.

Trump has addressed these topics before, often pointing to the violence in Chicago as something in sore need of attention.

This is a bold move for Kanye, who has been the butt of jokes since his SNL performance.

West ruffled feathers when he delivered a pro-Trump rant in front of a hyper-liberal crowd at the “Saturday Night Live” premiere earlier this month. After the show was over, West donned a “Make America Great Again” hat and went on a tear.

“So many times I talk to a white person about this and they say ‘how can you like Trump? He’s racist,” said West. “If I was concerned about racism, I would have moved out of America a long time ago.”

“And the liberals bully you and tell you what you can and cannot wear. And they look at me and say, ‘It’s not fair. How the hell did you get here?’ ”

In an apparent reference to Trump, Yeezy said: “If someone inspires me and I connect with them, I don’t have to believe in all their policies … We need to have a dialogue not a diatribe, because if you want something to change, it’s not going to change by saying, ‘F**k that person.’ Try love. Try love.”