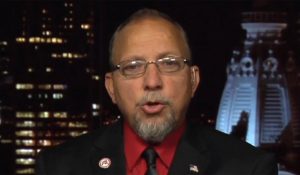 Durr, who drives truck for a furniture company and is a newcomer to the political seen, ousted Sweeney to win New Jersey’s 3rd Legislative District seat, according to election results tallied on Thursday.

Sweeney’s defeat was unexpected and threw his party’s legislative leadership contest into limbo Wednesday, when he postponed a meeting set for Thursday. Sweeney had been expected to return as Senate president, but who will take over and what margin Democrats will have in the state Legislature is unclear.

“It is stunning and shocking and I cannot figure it out,” Senate Majority Leader Loretta Weinberg went on to comment during an interview.

Sweeney has served as Senate president since 2010 and was responsible for shepherding Democrat Gov. Phil Murphy’s progressive agenda through the Legislature, including a phased-in $15 an hour minimum wage, paid sick leave and recreational marijuana legalization.

He is also known for his high-profile reversal on opposition to gay marriage. Sweeney said in 2011 he made the “biggest mistake of my legislative career” when he voted against marriage equality.

“Sweeney had faced electoral opposition before. In 2017, his feud with the state’s biggest teacher’s union over retirement benefits among other issues led to a battle in which the New Jersey Education Association spent millions to try to defeat Sweeney. The union’s effort failed,” the Newsmax report stated.

However, this time around, Durr managed to defeat Sweeney while only spending $153.31 on his campaign, according to Election Law Enforcement Commission documents.

Durr has described himself politically as being a major advocate for the Second Amendment and a fiscal conservative who wants to lower taxes.

During a recent interview he did with NJ.Com, Durr went on to describe how unlikely him winning the election would likely be.

“I joked with people and I said, ‘I’m going to shock the world, I’m going to beat this man,'” Durr stated during the interview conducted Wednesday afternoon. “I was saying it, but really kind of joking. Because what chance did a person like me really stand against this man? He’s literally the second-most powerful person in the state of New Jersey.”

Ever since Donald Trump became president, it’s become clear that anything is possible in politics now. You don’t have to be a billionaire to play a role in helping to get our country back on track, one state at a time.