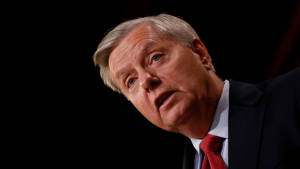 That “crazy fat kid” in North Korea, as John McCain once affectionately called him, is at it again, after his historic meetings with South Korea president Moon Jae-in at the end of April and a settled date and time for the Trump-Kim meeting had just been established.

He’s supposedly been suggesting that he’ll withdraw from the much-anticipated meeting if the only offer on the table is a “one-sided deal”, but Sen. Lindsey Graham is warning him to take what he can get.

Graham, once a staunch opponent of Trump, has warmed up considerably to the Trump administration due to his foreign policy, Conservative Tribune notes.

Appearing on Fox and Friends on Wednesday, Graham warned Kim that meeting with Trump is a matter of survival.

“If you want to survive … you need to sit down with the president and do a deal giving up your nukes,” he told the dictator, saying it would “crazy” for Kim to think Trump won’t act if he continues with his notorious nuclear program.

He also kindly reminded Kim that this is a new administration, and things are different now.

“That would probably work with Obama, but I’m here to tell North Korea that our president has drawn a red line. If you keep threatening the American homeland with a nuclear weapon, we’re going to destroy your regime. It’s that simple,” Graham said.

“So if you want to survive, Kim Jong Un, you need to sit down with the president and do a deal giving up your nukes,” he urged. “In return, we’ll guarantee your security and end the Korean War.”

He also warned that Kim and his advisers be careful not to underestimate POTUS.

“If you keep doing what you’re doing, you are miscalculating Donald Trump. He’s not Obama. You do this at your own peril,” he said. “To those who are advising Kim Jong Un to continue down the path you’re going … bad advice.”

Conservative Tribune says that the potential cancellation of the June meeting between Trump and Kim has apparently been in regards to annual joint military training exercises in the region involving South Korean and U.S. forces in the region, but so far, the meeting is going ahead as planned according to the State Department.

Graham is right there, Mr. Kim–not being destroyed by the greatest military might in the history of the world is a pretty good deal, no matter what else you get out of it.