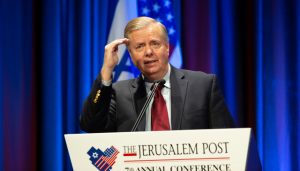 Sen. Lindsey Graham opened the confirmation hearing of Amy Coney Barrett by heaping high praise on her as someone who is academically gifted and is admired for integrity and personal character.

Along with this praise, he offered Democrats a stern warning about attempting to repeat the debacle that took place during the confirmation hearing of Justice Brett Kavanaugh several years ago.

Graham, who is the chairman of the Senate Judiciary Committee, went over the outline of the Senate schedule to get Barrett through the confirmation process and get her advanced to the bench before the November 3rd election.

Graham, a South Carolina Republican, described Barrett as “in a category of excellence” that should make the nation proud but warned that the confirmation will take place in an election year.

“My Democratic colleagues will say, ‘This has never been done,’” he said, countering, “The Senate is doing its duty, constitutionally,” even though no justice has been confirmed so close to an election.

Graham said there have been 19 justices confirmed in an election year, 17 of them when the White House and Senate parties were aligned.

The hearing will kick off Monday with opening statements delivered by various senators and by Barrett herself. Judge Barrett has been on the court of appeals for the 7th circuit since 2017.

Graham went on to say that the hearing will not be about “persuading each other, unless something really dramatic happens,” noting that the proceedings would allow the Democrats a chance to really dig into the judge’s philosophy.