Lindsey Graham Calls For An Investigation Of “All Things Ukraine.” This Should Be Thrilling. 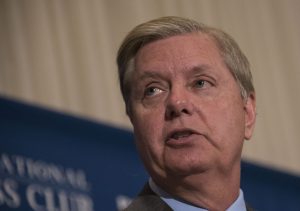 The the South Carolina Republican appeared on Fox News’ “Sunday Morning Futures” when he issued the call for the DOJ to investigate Biden and Ukrane with all the fervor and resources it used to investigate President Trump and Russia.

“Do you think the media in America would really look at it and report on it if there was something bad for the Bidens or are they unduly interfered in the 2016 election?” Graham continued. “I’m calling for somebody in the Justice Department to look at all things Ukraine. We have looked at all things Russia and Trump, his family, everything about his family, every transaction between the Trump campaign and Russia.”

“Now it’s time to see whether or not the Ukrainians released information regarding Manafort, who was Trump’s campaign manager. What relationships, if any, did the Biden world have to the Ukraine,” Graham continued. “What role, if any, did the Ukraine play in the 2016 election? So nobody’s looked at this, but somebody should. So I’m hoping the Department of Justice will look at the Biden-Ukraine connection like we looked at the Trump-Russia connection.”

“Can you imagine if this were the Trump family doing business like this?” he added. “I like Joe Biden, I like him a lot, but you can’t have it both ways here. They’ve done everything but turn the Trump world upside down, when it comes to this president there are no rules including a phone call, everything is fair game when it comes to Trump, there are no privileges.”

Sen. Lindsey Graham (R-SC) on Biden's Ukraine scandal: “Biden said everybody's looked at this and found nothing. Who is everybody? Nobody's looked at Ukraine and the Bidens. … I’m hoping the DOJ will look at the Biden-Ukraine connection like we looked at Trump-Russia connection” pic.twitter.com/ErbhiYNpud

Back in January of 2017, Politico reported:

Ukrainian government officials tried to help Hillary Clinton and undermine Trump by publicly questioning his fitness for office. They also disseminated documents implicating a top Trump aide in corruption and suggested they were investigating the matter, only to back away after the election. And they helped Clinton’s allies research damaging information on Trump and his advisers, a Politico investigation found.

A Ukrainian-American operative who was consulting for the Democratic National Committee met with top officials in the Ukrainian Embassy in Washington in an effort to expose ties between Trump, top campaign aide Paul Manafort and Russia, according to people with direct knowledge of the situation,” Politico added. “The Ukrainian efforts had an impact in the race, helping to force Manafort’s resignation and advancing the narrative that Trump’s campaign was deeply connected to Ukraine’s foe to the east, Russia. But they were far less concerted or centrally directed than Russia’s alleged hacking and dissemination of Democratic emails.

Of course, The Don himself tossed in his two cents on Sunday night, declaring that Biden forcing a “tough prosecutor out from investigating his son’s company by threat of not giving big dollars to Ukraine” was the real story:

What do you think? Will the DOJ look into Biden and Ukraine, or is the system rigged?